After an overall win for the four rings in round 11 of Blancpain GT World Challenge Asia, an incident-filled round 12 proved to be a challenging outing for the Audi teams. After a strong fifth place in round 11, Chen Weian and Rahel Frey recovered from a starting position of 18th in round 12 to finish their maiden Blancpain GT World Challenge Asia campaign on a high. The Audi Sport Asia Team TSRT duo stormed through the field to cross the line seventh after 60 minutes of racing at the Shanghai International Circuit in China. 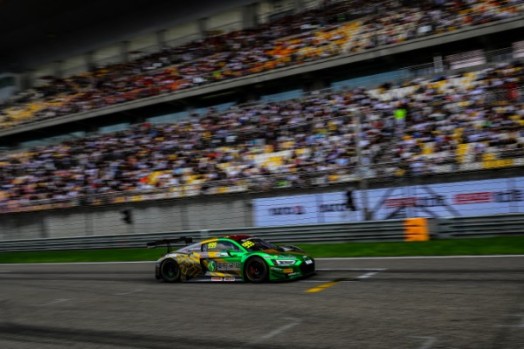 The strong pace of the Audi R8 LMS was on full display after all three teams were forced to power through the field in a bruising race. Cheng Congfu had started in third for Audi Sport Asia Team Absolute, but was turned around by a rival early on lap one and found himself down in 19th place. He and teammate Sun Jingzu recovered expertly to be running sixth on the very last lap, only for another contact with a GT4 car to take them down to 14th at the flag.

Weiron Tan in the team’s sister car also had an unfortunate opening lap, picking up a puncture that saw his good start wiped out as he emerged from the pits in 27th place. The Malaysian and driver partner, Rump, then set about working their way through the pack, with the round 11 winners recovering strongly to 13th.

“Overall, it’s been a successful season finale weekend for Audi Sport customer racing Asia in Shanghai. After an overall win yesterday, luck was not on our side today with many on-track incidents putting paid to the chances of our drivers and teams. But this is racing,” said Martin Kuehl, Director of Audi Sport customer racing Asia. “We are already looking forward to next season in Asia’s leading multi-marque GT championship.”

For Cheng and Sun, they end the year 11th in the Pro/Am championship (69 points), with Audi Sport Asia Team Absolute fourth in the Teams’ Championship (123 points).

The fourth season of the Blancpain GT World Challenge Asia kicks off at the Sepang International Circuit on March 28-29, 2020. The series then moves on to two double-headers in Japan, first at the Fuji International Speedway, then at Suzuka, before a second appearance at the Korea International Circuit in South Korea. The season then closes out with two events in China, one of which will be the series’ first endurance race at the Shanghai 888 event.