Three continental championships on sixteen different circuits in Asia, Europe and North America, for a total of thirty-six races. While awaiting the 2019 World Final in Jerez (24-27 October), the calendars for the 2020 Lamborghini Super Trofeo are presented with some big news along with some welcome returns to the championship’s origins. It all begins with the announcement about Misano Adriatico, which for the first time will host the grand finale of the Sant’Agata Bolognese sporting season. Both the Asian and European championships will once again be combined with the GT World Challenge championships organized by SRO, with whom Automobili Lamborghini has renewed its partnership for the 2021 and 2022 seasons as well. 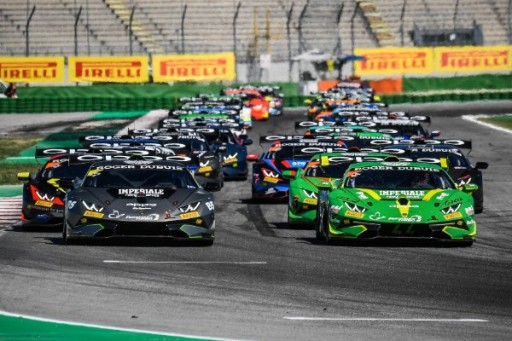 Regarding the extension of this agreement, Giorgio Sanna, Head of Lamborghini Motorsport, commented: “The history of the Lamborghini Super Trofeo in Europe has been linked with SRO since the ‘90s, so we are proud to be able to continue to offer our sporting customers a successful platform on the GT racing scene for the next three years, providing our teams and drivers with the best services, and also creating a synergy with the GT3 championships where we stand out.”

Stephane Ratel, SRO Motorsports Group founder and CEO, commented: “I am very pleased that SRO Motorsports Group will extend its long and successful relationship with Lamborghini Super Trofeo into the 2020 season. Our links to this championship stretch back many years, to when we introduced the first Lamborghini one-make series with the Diablo SVR in 1996, and have continued to grow stronger over time. The Super Trofeo offers the ideal compliment to our race weekends and I look forward to another exciting season in 2020.”

The race format remains unchanged: two 50-minutes races per weekend, rolling start, mandatory pit stops, and crews divided into four categories (Pro, Pro-Am, Am and Lamborghini Cup). In the Pro category for the first time single driver will be allowed.

The inaugural contest of the Super Trofeo Europe’s twelfth edition will take place in Monza, on the weekend of 18 and 19 April, an ongoing appointment for the single-brand event for eight consecutive years. The Autodromo Nazionale Monza is the absolute fastest circuit on the calendar, with the average speed of 194.2 km/h set by the Huracán Super Trofeo Evo in the 2018 qualifiers. After two years away, the Super Trofeo will return to run in France on the Circuit Paul Ricard on the last weekend of May. The Spa-Francorchamps stage is confirmed, scheduled for late July, in the same setting as the iconic 24 Hours reserved to GT3 cars. The Belgian circuit is the only one to have continuously hosted the Lamborghini Super Trofeo Europe starting with the inaugural edition in 2009. Since the first year, 3053 km of racing have been completed, for a total of 436 laps. Also confirmed is Nürburgring, at the beginning of September. A welcome return is slated for the circuit of Montmeló (Barcelona), which will host the penultimate round in mid-October following a long absence; in fact, the last time the European series ran there was in 2011.

Following tradition, the Super Trofeo Asia reaches its ninth edition. The start in Malaysia, at Sepang, on the weekend of 28 and 29 March, will be followed by the two Japanese stopovers at Fuji and Suzuka in May and June. The site of the fourth round on the calendar is still to be announced. The last Asia stage, before heading back to Misano, will be contested in mid-September in China, on the Shanghai track.

The Lamborghini Super Trofeo North America has now reached its eighth edition, with the Barber Motorsports Park in Alabama kicking off the season on the first weekend of April, followed by the customary stage at Watkins Glen (New York) at the end of June. In July the Super Trofeo North America will make its first visit to Canada, on the Toronto street circuit, for the third round of the calendar in mid-July, replacing the Road America stage. The VIRginia International Raceway stage, on the calendar since 2013, has been confirmed, followed by the classic appointment at Laguna Seca.