With almost four hours of dedicated Australian GT track time on Bathurst’s iconic Mount Panorama Circuit and a chance to take a run at the GT3 lap record, a number of the leading teams lined up for the inaugural Pirelli AGT SuperSprint intent on making an impression. 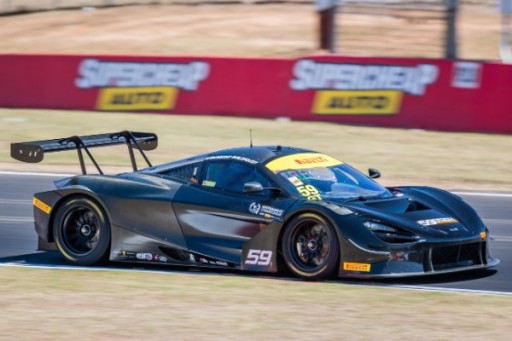 The battle between newly crowned Australian GT champions Audi with a pair of R8 LMS EVOs, title rivals Mercedes-AMG with a 2020-spec EVO for Supercars champion Shane van Gisbergen and the stunning 59Racing McLaren for European stars Ben Barnicoat and Tom Blomqvist set the scene for what promised to keep the teams and the fans glued to the timing monitors across the two days.

Session#1 (8:20am – Thursday, 28 November)
Despite a green a dusty track surface, clear, cool weather allowed the teams to dial themselves in quickly, Christopher Mies and Garth Tander setting the early pace before the Mercedes AMG team started to find their mark with Shane van Gisbergen who in the end found himself embroiled in a fantastic battle for the top of the timesheets with his Red Bull Holden Racing Team endurance co-driver Tander and the #2 Audi of Mies.

In the end Mies punched out a couple of quick laps at the end of the session in the ‘Valvoline’ Audi to claim the top time with a best of 2:03.5080 – van Gisbergen second with a 2:04.3660 ahead of Tander, whilst former Bathurst 1000 winner Luke Youlden in Vince Muriti’s ‘Perfect Auto Body’ Audi set a 2:05.7300 to put three Audis into the top four.

Yasser Shahin showed the value of a week of Audi Sport R8 LMS Cup competition in Malaysia just days ahead of the AGT SuperSprint to take his Mercedes AMG GT3 to a stunning time of 2:06.3550, whilst Ben Barnicoat spent time dialling himself into the 59Racing McLaren 720S GT3 with the team focussed on data through the session.

Liam Talbot again impressed in the Trofeo Motorsport Lamborghini with a best of 2:08.4900, ahead of the returning James Koundouris, Adam Hargraves in the ‘Invitational’ MARC II Mustang, Mark Griffith in his Mercedes-AMG GT3 and John Martin who was helping the Trofeo Motorsport team gain valuable data at Mount Panorama with their Huracan Super Trofeo EVO ahead of the cars debut at the 12 Hour in January.

In the battle for Radical SR3 honours, 2019 champion Chris Perini emerged on top, his 2:13.8660 quicker than he’d ever previously circulated Bathurst, whilst his 2019 title rival, and the man with the Bathurst record for the venerable SR3 – Peter Paddon – could only muster a 2:14.4510, whilst Paul Braico was an impressive third fastest in class.

The opening session ran relatively trouble free, although Mies was one of a small number of cars to spin – the German coming unstuck on the exit of the Chase without any problems, whilst technically a couple of cars endured setbacks, one of them being the mighty NISMO GT-R of Brett Hobson and the Kostecki brothers which suffered an engine sensor problem early in the session limiting laps for the team. Hobson though ran the car in other sessions contesting the event, eking out a mid 2:06 to provide the Kostecki brothers a chance to dial themselves during the remaining three sessions.

Session#2 (1:40pm – Thursday, 28 November)
With a number of categories on track ahead of the second 60-minute session, teams were able to start to push the pace, although the higher ambient temperature was having a minor effect on lap times, although that didn’t seem to deter van Gisbergen who despite dropping down to a 2:03.8940 felt there was more in the car, whilst McLaren found their own gains to improve to second with a 2:05.1270 late in the session,

Tander continued his impressive pace to be third, again just marginally clear of Youlden who was looking forward to a run on ‘green’ rubber, whilst Mies made it a trio of R8s all within half a second.

Yasser Shahin was enjoying his time with the Triple 8 team to be shadowing the Pros, whilst Dean Grant was starting to find his feet in the re-liveried Urban Alley Brewery BMW M6 GT3.

Sadly the afternoon session claimed its first victim – newly crowned Radical Australia Cup champion Chris Perini. The SR3 driver was looking to improve on his session#1 best and was up almost a second as he came into The Chase, but an error on the exit kerb saw him fired across the circuit hard into the barriers doing significant bodywork damage to his GWR-run RSX. Fortunately he was unhurt, but the car was retired, whilst the session was red-flagged for the Safety Crew to repair the tyre barriers and recover the car.

Victor Zagame too suffered his own setback early in the session with a light brush with the wall on top of the mountain forcing some overnight repairs for the Melbourne Performance Centre team, whilst Jake Kostecki found the gravel trap at turn one after putting a wheel off on the entry to the corner, fortunately there was no contact with the barriers, although it forced a third visit to the pits for the teams as the vehicles were recovered.

Session#3 (7:50am – Friday, 29 November)
With almost perfect conditions greeting the teams for the early start Friday morning, it was just a matter of which of the leading cars would claim the top time in the final session under ‘BoP’ conditions.

Audi were keen to assert their authority early with Mies embroiled in a battle for the top spot with van Gisbergen and team-mate Tander, whilst Luke Youlden was again in the mix, but it was the McLaren that was making the biggest gains, Barnicoat improving to a best of 2:02.6490 at the end of the session to be second, but still more than a second down on van Gisbergen who set a stunning 2:01.5220 on his penultimate lap.

That saw much back-slapping in the Triple 8 garage, although with the new 2020 EVO version of the thundering AMG GT3 yet to be delivered it’s ‘Balance of Performance’ for the new season, there was some question about just how close to an indicative time it would be ahead of January’s 12 Hour season opener.

Behind the top GT3 teams Liam Talbot improved again to be into the high 2:04s with Shahin not far behind whilst MARC II Mustang driver Adam Hargraves set a stunning 2:06.2410 in the ‘Invitational’ category, just clear of Tony Quinn in the gorgeous new twin-turbo V8 Aston Martin Vantage, the multiple Australian GT race winner all smiles after punching out a 2:06.4580, admitting there was life in the old dog yet. James Koundouris was also impressively in the 2:06s, whilst Kurt Kostecki was finding his feet in the Hobson Nissan, the team boss though admitting that both Kostecki brothers were being cautious and respectful of the GT-Rs impressive performance.

Dean Grant emerged with his best time of the weekend to be just shy of a 2:06, whilst Geoff Taunton and Mark Griffith punched out their best laps of Mount Panorama to be comfortably within reach of the leaders, Griffith within sight of a low 2:07 before being baulked by slower cars in the final sector of the lap.

Session#4 (1:10pm – Friday, 29 November) UNRESTRICTED
The expectations were high heading into the final ‘unrestricted’ session after Christopher Mies’ stunning 2018 performance, and leading into the 40-minute session there was much speculation between teams and media as to exactly who was – or wasn’t – going to go all-out in search of a new record.

Ultimately it proved that just three cars were prepared to chase a time, whilst one of those was eliminated almost immediately after Vince Muriti suffered a spin on his own water at ‘The Cutting’. The #33 Audi fortunately avoided the walls to return to pit lane unscathed, but damage to the radiator sidelined the team, ending any chance Luke Youlden had at challenging the record – the former Bathurst 1000 winner lamenting his first chance to tackle the circuit on green tyres and without BoP restrictions, in the end he could only shrug and walk away from what had been a challenging close to 2019. Unsurprisingly the Mies/Tander combination and van Gisbergen were quick, although changing conditions ahead of the final session meant that they’d be unlikely to improve on the record, a blustery head-wind on the main straight and the hotter warmer early afternoon conditions ensuring the Mies benchmark would remain unbroken.

Despite that the McLaren team threw everything at it, although unlike the Valvoline Audis and the Triple 8 cars, they too ran without restriction whilst Dean Grant also took advantage of the opportunity with the BMW which like Mies in 2018, ran with the softer ‘M’ compound Pirelli slick.

After the session resumed the McLaren continued the charge with a sequence of purple sectors, ultimately going best on the final rotation as the clock clicked down to 40-minutes, Barnicoat’s best a 2:00.5640, the menacing black 720S GT3 returning to pit lane with the Englishman quickly out of the car to inspect damage to the rear of the car after making light contact with the barriers at the top of the mountain.

van Gisbergen too set his fastest lap on the final rotation to go P2, his 2:03.8790 more than 3.3-seconds slower than the McLaren, whilst Mies had earlier jumped the black Mercedes to set his best at 2:04.0710. Tander had shadowed his German team-mate all session, the pair sharing fastest sectors before Mies ultimately grabbed third, whilst Yasser Shahin was all smiles with his best ever lap of the mountain and a 2:05.8500 to narrowly beat Dean Grant in the unrestricted BMW.

The Hobson Nissan was next with Jake Kostecki finding his feet in the last session to break into the 2:06s, whilst Tony Quinn, Mark Griffith and James Koundouris rounded out the top ten.

Despite only turning a handful of laps before suffering damage to the radiator from debris, Vince Muriti’s 2:12.0260 gave him 11th, ahead of Adam Hargraves, Joseph Ensabella – in the Trofeo Motorsport Huracan GT3 after retiring his Porsche early with an electrical issue – Geoff Taunton, Jason Miller, 2019 AGT Trofeo Challenge Champion Nick Karnaros, David Greig and Victor Zagame.