KC Motorgroup Ltd. (KCMG) showed strong pace in the 2020 Bathurst 12 Hour, running inside the top five for much of the race in the #18 Nissan GT-R NISMO GT3 before a late brake change saw them drop a number of places. 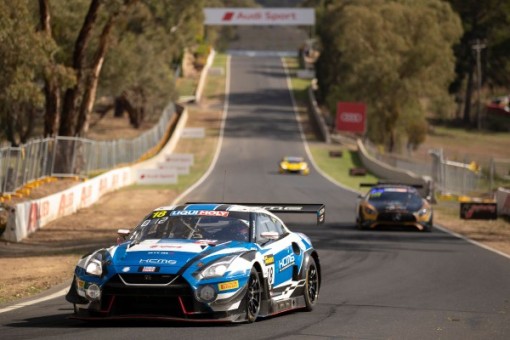 Returning to the mountain venue with the Japanese manufacturer, KCMG entered a pair of Nissan GT-R cars as they looked to build on last year’s impressive debut.

With the #35 car sidelined following damage sustained in practice, the #18 Nissan of Joao Paolo de Oliveira, Alexandre Imperatori and Edoardo Liberati immediately showed it was up to the task, qualifying fourth for the 12-hour race.

Swiss driver Imperatori took the start, passing third and battling for the lead as the early pacesetter. After double stinting, de Oliveira was now on board and made several passes to get back to fourth from eighth following a safety car period.

At the midpoint of the race, Liberati took over the Nissan and continued to challenge the top five, with de Oliveira and the Italian both completing stints as the race neared the final third.

For the last hour, Imperatori assumed driver duties and was running eighth before the team had to make a late brake change, seeing the #18 Nissan drop outside the top 10 to finish 12th.

Next for KCMG will be the opening 2020 NLS (formerly VLN) round from the Nürburgring-Nordschleife on 21st March.

Alexandre Imperatori: “Bit disappointed with the result because we had a good race car today. I took the start and moved into third. We were running strongly and making sure we didn’t make any mistakes. We spent a bit too much time in the pits, but we made some good moves on track. We had to take a late gamble to change the brakes which didn’t pay off and missed out on the top 10. It’s a shame as the team has worked hard over the winter to get a good result here.”

Joao Paolo de Oliveira: “We fought hard all race. The team did everything they could. We couldn’t go as long as the others as our consumption was a bit higher. In the end stayed on the lead lap, but in the last hour or so we fell out of contention. The car had the pace and there’s still some work to do, but I’m proud of what we did. Now we need to fix our weaknesses and come back stronger.”

Edoardo Liberati: “We had a really good race, running around third and fourth. Unfortunately in the last 30 minutes we had to stop to change brakes, which costed us a top five finish. The performance was really good overall though, the team did a great job and everything went smoothly until the last moment.”

Paul Ip, Team Founder: “We are very proud of the pace we had during the Bathurst 12 Hour this weekend. Our three drivers gave their all and made some great overtakes throughout the race. It’s tough to lose out on a top 10 result so late on, but it’s a strong start to the year and I’m confident that we can build on this.”