The reigning world sports car champions Michael Christensen (Denmark) and Kévin Estre (France) secured position two in qualifying for the fifth round of the Sports Car World Endurance Championship WEC on the Circuit of the Americas. The two were only 0.219 seconds shy of pole position in the new Porsche 911 RSR on the 5.513-kilometre Grand Prix circuit. In the No. 91 sister car, Gianmaria Bruni from Italy and the Austrian Richard Lietz concluded the qualifying on fifth place and take up Sunday’s race from the third grid row. In the GTE-Am class, the driver trio Matteo Cairoli (Italy), Le Mans class winner Egidio Perfetti (Norway) and Germany’s Laurents Hörr clinched pole position in the 2017-spec Porsche 911 RSR fielded by the Project 1 customer squad. 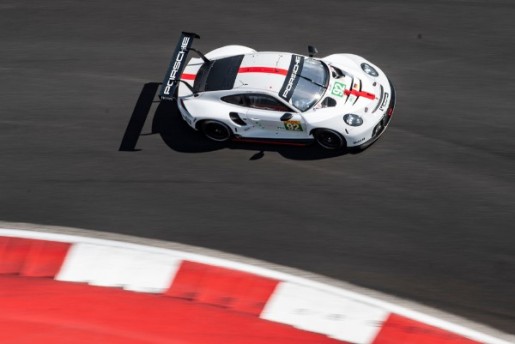 During the 20-minute qualifying session held in the early evening, the Porsche GT Team drivers were constantly hampered on their flying laps by heavy traffic and overtaking manoeuvres. Bruni and Christensen took up the hunt for top times under partly cloudy skies and in an outside temperature of 16 degrees Celsius. Halfway through the session, they handed the car to their teammates, Lietz and Estre, in positions two and five. The Frenchman managed to improve the average time, however heavy traffic prevented Lietz from clocking a better time in the final phase. Christensen and Estre take up the six-hour race at midday on Sunday from position two in the GTE-Pro class. Their colleagues Bruni and Lietz head into round five from P5.

Qualifying quotes
Alexander Stehlig (Head of Operations FIA WEC): “We could have done better today, but nevertheless we’re satisfied with positions two and five. We tackle the six-hour race feeling confident because the cars ran well during free practice, the long runs and in qualifying. Congratulations to our Project 1 customer team for posting pole position in the GTE-Am class.”

Kévin Estre (Porsche 911 RSR #92): “Neither Michael nor I managed to turn a perfect lap, so we’re satisfied with second place. It’s important to start from the front grid row. We have to try to stay at the front and go for the lead. The car performed really well during both the free practice and the long runs.”

Michael Christensen (Porsche 911 RSR #92): “We couldn’t do any better today. As expected, Aston Martin was very strong in qualifying. Our cars ran very well and we were very close to the polesitter. For this reason I’m feeling really optimistic for the race.”

Gianmaria Bruni (Porsche 911 RSR #91): “The new Porsche 911 RSR ran beautifully and a front row spot would have been possible. Unfortunately, Richard encountered a lot of traffic and had to overtake twice, which cost him time unfortunately. Still, it’s great that he still managed to claim fifth place for us.”

Richard Lietz (Porsche 911 RSR #91): “It was a long day today with two practice sessions and the evening qualifying. We managed to improve our car from session to session. Unfortunately I had a lot traffic, but that’s what happens when you’re out on the track with different classes. We’re taking up the race from the second grid row. A lot can happen over six hours.”

Matteo Cairoli (Porsche 911 RSR #56): “It’s fantastic to be on pole here. However, my lap wasn’t totally perfect. I made a mistake in the last corner and lost some time. Luckily, Egidio Perfetti made up for it. The setup and the balance of our Porsche 911 RSR was basically very good today.”