The build-up to this year’s Total 24 Hours of Spa has taken an important step forward with the release of the official poster for the 22-25 October event. 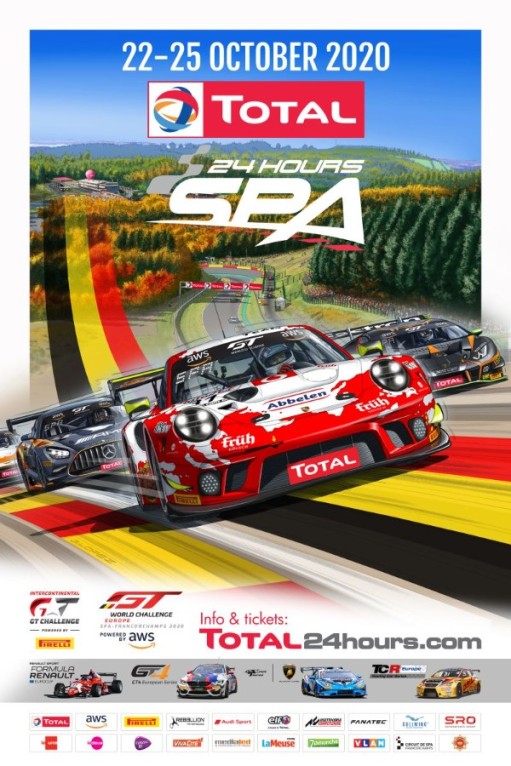 Traditionally staged in late July, the 2020 race has moved to an autumn date in accordance with local COVID-19 guidelines. As such, the newly revealed artwork carries extra importance as a symbol of the progress being made towards the latest running of the twice-around-the-clock classic.

This year’s poster is the second to be created by renowned illustrator Guillaume Lopez, whose motor racing portfolio features extensive work for the iconic comic strip Michel Vaillant. The dramatic colours and sense of speed clearly reflect this style, while also conveying a scene that is instantly recognisable as the Total 24 Hours of Spa.

The 2020 edition’s October date will create a unique visual spectacle never before seen in almost a century of 24-hour racing at Spa. The poster draws inspiration from this by celebrating the colours of the season, with the vast Ardennes forest tinged with vibrant red and orange tones. Running in autumn will also mean fewer daylight hours at the circuit, adding further night running and thus enhancing the sporting challenge faced by competitors.

The action is centred on the iconic Raidillon corner. Acknowledged as one of the most challenging and visually impressive turns in world motorsport, it is a firm favourite among fans and spectacular place to watch GT3 cars at full speed. The backdrop also encapsulates the sheer scale of the 7km Spa-Francorchamps circuit, with the run towards Pouhon and the sprawling pit complex visible in the distance.

The central image shows a Porsche 911 GT3 R, the same model that clinched victory at last year’s race and returned the German marque to the top step of the podium for the first time since 2010. It carries the livery of Frikadelli Racing Team, further reflecting Porsche’s 2019 title success in Intercontinental GT Challenge Powered by Pirelli.

The leading 911 is pursued by a Mercedes-AMG GT3, celebrating the 10th anniversary of the German marque’s successful customer racing programme. The Orange1 FFF Racing Lamborghini Huracan GT3 that clinched last year’s GT World Challenge Europe Powered by AWS title is also shown in hot pursuit as the cars embark upon another lap.

Running from 22-25 October, this year’s Total 24 Hours of Spa will be the 20th staged as a GT race and the 10th since the highly successful GT3 rules platform was introduced in 2011. It will represent the sixth round of the GT World Challenge Europe Powered by AWS season, as well as the third event on the Intercontinental GT Challenge Powered by Pirelli calendar.

The new poster is one of three distinct versions that will be revealed ahead of the race, with each depicting a unique aspect of the Total 24 Hours of Spa experience. A full timetable for the Belgian endurance classic is also set to be disclosed in the coming weeks, representing another crucial step towards the start of the world’s most challenging GT contest.