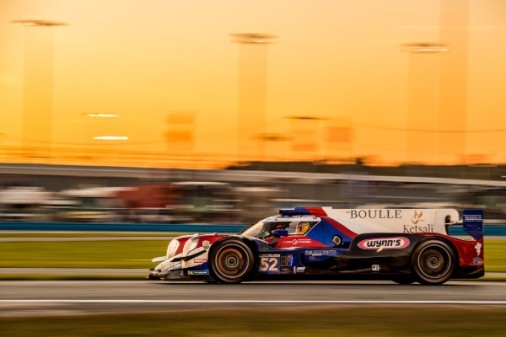 Kelly had a strong debut with the team last year at the IMSA Road Race Challenge at Road America. After a 9-year racing hiatus, the 52-year-old driver contributed to the fourth consecutive win for PR1/Mathiasen in the 2019 LMP2 season. The win positioned the team in the LMP2 points lead for the IMSA WeatherTech SportsCar Championship.

Pigot will be making his IMSA LMP2 debut this weekend but he is no stranger to the bumpy 3.74-mile track. The Californian has competed in the 12-hour event at Sebring three times driving for Mazda in the prototype class. All three consecutive years spanning from 2016 to 2018 the prototype scored top ten finishes with 2017 being a top five.

PR1/Mathiasen Motorsports will hit the track beginning at 6 P.M. EST for practice session one on Friday, July 17th. The green flag drops at the historic venue for the first time this year at 5:35 P.M. EST on Saturday, July 18th.

“The whole team is very anxious to be getting back to racing, as we’ve been busy testing with a variety of different cars but it’s just not the same as a competition. I know Patrick Kelly has been working very hard to prepare and get himself in race trim, which will be very important with the events schedules being very tight. We are happy to welcome Spencer Pigot to the family and feel very strong about his abilities to help the program in many ways. Although we haven’t competed together yet I feel like he will be a great addition to the team.”

“Out of an abundance of caution, Leslie and I are unable to attend any of our races. However, this doesn’t in any way diminish our enthusiasm for the team to finally return to racing after the five month break. Bobby has assembled a great group of drivers and team members for this weekend’s race in Sebring. It’s a real pleasure to have a driver with Spencer Pigot’s talent to be able to join Patrick Kelly. I anticipate a top performance from these two drivers and hopefully a P1 finish at the end. We’ll be watching the race on TV and cheering on the team from a distance. We pray for a safe and healthy weekend for everyone in Sebring.”

“I’m really looking forward to joining PR1/Mathiasen Motorsports this weekend in Sebring. I’ve seen their name in many different series over the years winning races and championships so it will be great to be part of the team. It will be a challenging event with how condensed the schedule is and how hot it will be, we aren’t used to running at Sebring this time of year. I’m excited to be co-driving with Patrick and together with the rest of the team hopefully we can have a strong race.”

“After a long time out of a race car I’m very excited to return. I am looking forward to a great season”