ADAC GT MASTERS SEASON READY TO OPEN AT THE LAUSITZRING

The hunt is on! Can Patric Niederhauser (28, CH) and Kelvin van der Linde (24, ZA, both Rutronik Racing) in the Audi become the first drivers ever to defend the ADAC GT Masters title, or will the opposition strike back? The first round of the highly competitive GT racing series, featuring more than 30 super sports cars, will start at the Lausitzring this weekend (31st July to 2nd August). 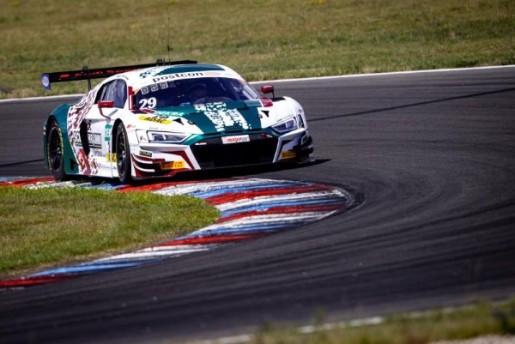 What’s new in 2020?
The Bentley Continental GT3 from T3 HRT Motorsport is the most spectacular addition to the field. The Mercedes-AMG teams will compete with a totally revised car. HTP Winward Motorsport, Zakspeed BKK Mobil Oil Racing team and Toksport WRT will field the evo version of the racing car from south-west Germany. Team WRT from Belgium are one of the most successful GT3 teams around on the international scene and will be making their debut in the ADAC GT Masters. After a number of guest starts last year, Toksport WRT and SSR Performance will be contesting their first full season in the series with a Porsche 911 GT3 R. Tyre partner, Pirelli, will provide the field with new tyres this year.

The favourites
It’s difficult to talk in terms of a favourite in the ADAC GT Masters, as the field is so hotly contested. In the official pre-season tests, more than 20 vehicles were covered by just one second at times. The best time of anyone in testing was achieved by Raffaele Marciello in the Mercedes-AMG, closely followed by drivers from two other manufacturers, defending champion, Kelvin van der Linde (Audi) and Sven Müller (27, GER, Precote Herberth Motorsport) in the Porsche. A look at the statistics will also quickly show that exciting motor racing is more or less guaranteed at the Lausitzring. In the 22 races held there by the ADAC GT Masters so far, cars from six different brands have been winners.

The local favourites
The Lausitzring is the home circuit of BWT Mücke Motorsport. The Berlin-based outfit will field two Audi R8 LMS supercars this season, and for three of the team’s four drivers, the opening weekend will also be a home fixture. Stefan Mücke (38) comes from Berlin as does series newcomer, Mike Beckhusen (20). Beckhusen shares the team’s second R8 LMS with Igor Walilko (22, PL), whose hometown of Zielona Góra is only 150 kilometres from the Lausitzring. T3 HRT Motorsport from Radebeul also only have a short trip to the circuit in Brandenburg.

The circuit
The Lausitzring is back on the ADAC GT Masters calendar for the first time since 2017. The 3.478 km circuit is made up of oval track and of sections in the infield. The races at the Lausitzring will take place in the absence of spectators while following hygiene and infection protection measures developed by the ADAC GT Masters and approved by the authorities.

ADAC GT Masters eSports Championship
The ADAC GT Masters eSports Championship will stage the first of this season’s eight races on Saturday at 6.30 pm. 20 participants and four guest starters will compete on the virtual version of the Lausitzring. Prize money this season totals some 80,000 euros. The race will be streamed live on youtube.com/adac and adac.de/motorsport.

Comments in the run-up to the weekend

Kelvin van der Linde (Rutronik Racing, Audi R8 LMS): “I’ve raced in the ADAC GT Masters for many years now but have never had the same team-mate or same outfit for two years in a row. It’s different now. I see that as being something very positive, because we can continue where we left off last year. We have a great team and an excellent package. Our goal is very clear, we aim to win.”

Patric Niederhauser (Rutronik Racing, Audi R8 LMS): “Everyone will start out with the same points total of zero again and will have an equal chance. Defending the title is obviously our goal, but of course, we also know how high the standard is. It feels even higher this year than in previous seasons. We will also need a bit of luck, for sure, but still, we are very well equipped.”