At round four of the IMSA SportsCar Championship at Road America, the Porsche drivers will fight for the first win of the season with the 911 RSR. The North American factory squad fields two ca. 515-hp RSR racers in the GTLM class. Porsche is the only manufacturer by now to have climbed the podium at every IMSA WeatherTech round this season. At Elkhart Lake, the sports car manufacturer aims to bring home the first victory in the USA for the latest version of the 911 RSR. In addition to the two works cars from Weissach, a customer vehicle will tackle the race over two hours and 40 minutes: Wright Motorsports contests the GTD category with a Porsche 911 GT3 R. 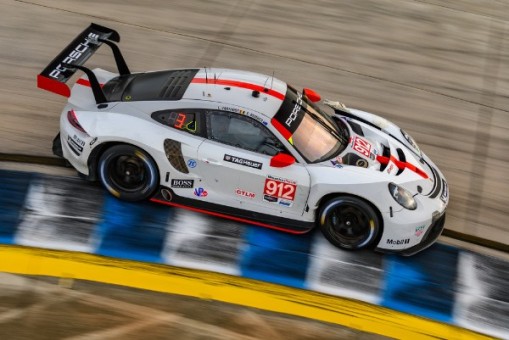 The race
Opened in 1955, Road America is the longest track on the IMSA SportsCar Championship calendar at 6,515 kilometres. The storied racetrack is located a good two hours by car north of Chicago in the community of Elkhart Lake and is considered the cradle of American sports car racing. Porsche last celebrated a one-two victory in the GTLM class at Road America in 2015.

The Porsche GT Team drivers
Works drivers Earl Bamber (New Zealand) and Laurens Vanthoor (Belgium) share driving duties in the No. 912 Porsche 911 RSR. The reigning GTLM-class champions have scored second place at the first two rounds of the season in Daytona. At Sebring, the pair claimed the third podium step after a spirited performance. In the drivers’ championship, Bamber and Vanthoor rank second just one point off the lead. Their team colleagues Nick Tandy from Great Britain and Frenchman Frédéric Makowiecki concluded the 24-hour race at the end of January and the race over 2:40 hours in Daytona on 4 July in third place. In the overall classification, Porsche has advanced to second place after Sebring.

The customer team
At round four of the North American sports car series, the seasoned customer squad Wright Motorsports again fields an over 500-hp Porsche 911 GT3 R in the GTD category. The squad from the U.S. state of Ohio entrust the cockpit of the No. 16 car to works driver Patrick Long (USA) and his compatriot Ryan Hardwick. The team currently ranks third in the class for vehicles compliant with the GT3 regulations.

Live streaming of the race
Round four of the IMSA WeatherTech SportsCar Championship at Road America takes off on Sunday, 2 August, at 11.05 p.m. local time (18:05 p.m. CEST). The race over 2:40 hours can be viewed outside the USA and Canada on http://www.imsa.com.

Comments prior to the race
Pascal Zurlinden (Director Factory Motorsport): “After the last race at Sebring, our team analysed what happened there in order to safely avoid collisions in the pit lane in the future. The incident robbed us of a big chance to win. The Porsche 911 RSR was definitely very competitive. I’m sure we’ll be strong at Road America, too. We want to score our first victory with the new car and reap the rewards of our hard work.”

Steffen Höllwarth (Head of Operations IMSA Championship): “After the races at Daytona and Sebring, the next highlight on the IMSA calendar is here – the race at Road America is a real classic. The storied circuit with its fast corners blends into the hilly landscape beautifully. We have a strong overall package with the new Porsche 911 RSR. We’ll do our utmost to reposition ourselves at the top of the championship and notch up our first victory in the USA with the new 911.”

Nick Tandy (Porsche 911 RSR #911): “Road America has always been difficult turf for Porsche. Still, I think the experiences we’ve gained from our tests last year with the new 911 RSR will help. We have the speed and great teamwork. The car is very reliable, and that’s extremely important. It’s always great to race on a fast and flowing circuit like Road America. It’s like riding a rollercoaster.”

Frédéric Makowiecki (Porsche 911 RSR #911): “Road America feels like new territory to me. I haven’t raced there since 2016 so I’ll first have to familiarise myself again to this very special, very long circuit. But that shouldn’t take long. Our car will definitely be very competitive in Elkhart Lake, as well. If we can tap the full potential then we have the chance to win.”

Earl Bamber (Porsche 911 RSR #912): “Road America is one of my favourite tracks in North America. The layout is fantastic and it’s simply fun. Unfortunately, we’ve never really been at the forefront there in recent years. That should change next weekend. Our new Porsche 911 RSR has everything it takes to be successful there.”

Laurens Vanthoor (Porsche 911 RSR #912): “Road America is very fast and demanding. The tradition-steeped racetrack offers a lot of challenges: high-speed passages, a variety of corners, difficult braking points and good overtaking possibilities. Road America is one of my favourite tracks in the USA. I think we can achieve a good result there with our new Porsche 911 RSR.”