The season opener of the ADAC GT Masters at the Lausitzring was a real scorcher. BWT Mücke Motorsport lined up to race at the 3.47-km circuit in temperatures of more than 30 degrees. The BWT Audi R8 LMS #26 was driven by experienced team member, Stefan Mücke, and young Ricardo Feller. Two newcomers to the series, Igor Walilko and Mike Beckhusen, were at the wheel of the BWT Audi R8 LMS #25. 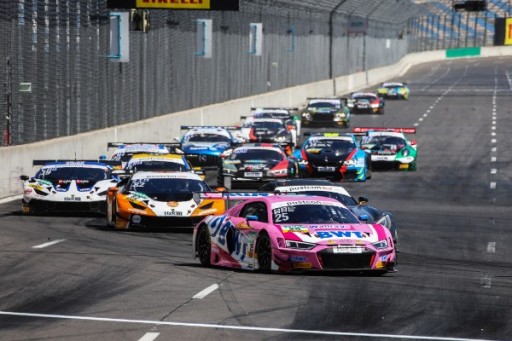 Top grid position for Feller and Mücke: Feller made a strong start in the BWT Audi R8 LMS #26, setting the fastest time in practice for Junior and Trophy class drivers. Feller and Mücke also achieved a great result in FP2 when the entire field was in action by finishing fourth, just 0.159 seconds down on the leaders. They got even closer to best time in Q1 on Saturday, to within 0.149 seconds, which in the fiercely competitive field of the ADAC GT Masters translated into grid slot 7.

In Saturday’s race, Feller came into the pits at the end of his stint, lying in a strong fourth place. A technical problem meant that the stop took longer than planned, so car #26 dropped back. At the finish line, Mücke had managed to move up into P17, narrowly missing the points. Still, Feller was rewarded for his top performance with ten points in the Junior classification. Mücke started the second race from position 25. However, their intended charge up the field proved difficult, because the track was dirty off the racing line. Coming home in 22nd place, they missed the points again by just a few seconds, but Feller scored another eight points in the Junior classification for drivers under the age of 25.

Strong performance by Walilko and Beckhusen: The two rookies from BWT Mücke Motorsport showed their pace early on in the practice sessions. They turned in a strong performance in the session for Junior and Trophy drivers, coming fourth. Walilko and Beckhusen booked P18 in FP2 when all 33 super sports cars were in action, just six tenths behind the leaders. A similar gap in Q1 on Saturday meant 23rd place on the grid. In the hard-fought field, Walilko worked his way several places up the field during his stint. However, a technical problem during the pit stop cost Beckhusen time, and so, no more than 28th place was possible. Still, Walilko and Beckhusen took three points each in the Junior classification.

31st place on the grid for the second race on Sunday again reflected the highly competitive nature of the ADAC GT Masters field, because actually, Beckhusen was just less than a second adrift. He was unlucky on his hot lap, because a car in front of him threw dirt up onto the track. He was even more unlucky in the race, as a fellow competitor ran into the back of his BWT Audi R8 LMS #25 on the first lap and caused him to spin. Beckhusen had to head for the pits to change tyres. This unscheduled stop meant that no more than 28th place was possible. Nevertheless, Beckhusen and Walilko collected six points in the Junior classification.

The second race weekend of the ADAC GT Masters season is in just two weeks’ time when the Super Sports Car League will be at the Nürburgring, 14th to 16th August.

Comments about the weekend

Stefan Mücke (BWT Audi R8 LMS #26): “Our pace was good all weekend. I was highly delighted with Ricardo’s performance in Q1. The race also started well. We were lucky and made it through the turbulent period at the start without any problems. We found ourselves in the Top Five. Unfortunately, we lost time on the pit stop due to a problem with the electronics, which cost us a very good result. We’d got it fixed by the next day. Still, things didn’t go quite so well on Sunday. The car was well balanced, but we were unable to take advantage of that in qualifying. We were also unlucky, because we were in traffic when our tyres were in the optimal window. It was difficult to get ahead in the race, because the field is so competitive. To sum up after the weekend, the pace is there, but we have to make more of it, especially in qualifying.”

Ricardo Feller (BWT Audi R8 LMS #26): “I’m heading home from the Lausitzring with mixed feelings. We had a good package, but unfortunately we couldn’t translate it into decent results. We were a bit unlucky in the first race. I pitted from fourth, and Stefan could certainly have maintained that position to the end, but we had a technical problem on the pit stop and lost a lot of positions as a result. Unfortunately, we couldn’t do much in Race 2. Hopefully, luck will be on our side in two weeks’ time at the Nürburgring, because the track really suits me.”

Igor Walilko (BWT Audi R8 LMS #25): “The weekend was not easy for us, and the results did not live up to our expectations. But sometimes, you are powerless in motorsport, like when we had the technical problem in the first race and a contact with another driver in Race 2. It was unfortunate, but we have to focus on the positives. We can learn a lot from these moments and we’re getting a better understanding of the car with every kilometre that we drive. It’s not easy as a newcomer to such a competitive series, so we’ll have to work even harder in order to ensure that things go better at the Nürburgring.”

Mike Beckhusen (BWT Audi R8 LMS #25): “Sadly, we had a bit of bad luck this weekend. We showed in practice that we have the pace. Unfortunately, we didn’t find an optimal setup for qualifying. Igor gained several positions in the first race. Unfortunately, a technical problem when changing drivers cost us a few seconds. In my qualifying on Sunday, I was unlucky when a car in front of me threw dirt up onto the track, which meant I lost traction on the rear axle. In the race, a fellow competitor ran into the back of me on the first lap, for which he apologised after the race. Igor and I were certainly able to learn a lot from the weekend. We will do everything we can to achieve better results at the Nürburgring.”

Michael Weiss (Technical Director): “After a long break and equally long wait, we bolted on the slicks for our first race weekend. We’d had some very promising test sessions at the Lausitzring, and we also mastered the race weekend well despite all the challenges. Our performance in Q1 was roughly as expected. The rookie car did a good job. The sister car was on course for a top position, but just one second covered 27 cars, so the result was a little disappointing. 19 cars were within a second of each other last year when the season started. The field has moved much closer together. The gaps can be measured in hundredths of a second. Unfortunately, we had a problem on the pit stop in the first race with both vehicles. They took a while to get restarted, but we got that sorted for the second race. Another driver caused Mike to spin on the first lap and we had to change tyres, so there was nothing doing on Sunday.”

Peter Mücke (Team Principal): “The weekend got off to a good start. Ricardo in P7 was well placed on the grid for Saturday’s race. He pitted from P4, but unfortunately, there was a technical problem which cost us several positions. Things were different on Sunday. We were not well placed, and Mike was hit by a fellow competitor on the first lap. He had to come into the pits with a puncture and then we were unlucky again later on with the safety car. The quality of the drivers and teams in the ADAC GT Masters has improved considerably compared to last year. The standard is extremely high.”