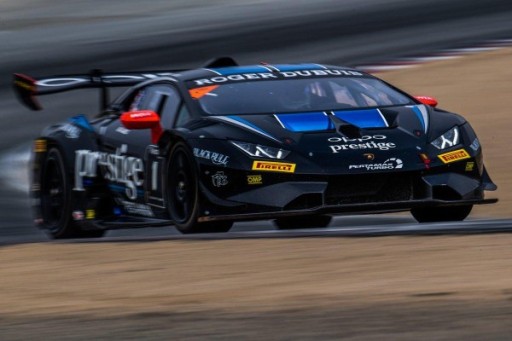 Despite the huge success Northumberland’s Middleton has enjoyed since graduating to car racing in 2015, the hugely talented youngster was set for a frustrating season on the sidelines due to budget difficulties – a scenario only compounded by the COVID-19 pandemic and the global lockdown.

With the motorsport year now finally moving into action, the Ashington-based driver has been presented with a fantastic opportunity to contest the five-round Lamborghini Super Trofeo North America which gets underway later this week, on 7th/8th August, at Road America in Wisconsin. He will run in the Pro class in the No.1 Prestige Performance with Wayne Taylor Racing Lamborghini Huracan.

“It was completely my mindset to have to write this year off and sit on the sidelines”, said the British Racing Drivers’ Club (BRDC) Rising Star, “Then I got a call out of the blue off my manager Mick [Gomme] saying a team in America, WTR, wanted me to race for them. Everything has happened so fast and it’s now all systems go which is fantastic, especially with such a successful team.

“I’m absolutely elated to be racing this year, it’s such an amazing opportunity. It’s strange, with coronavirus having had such a negative impact around the world, and created so many problems, it has also created some opportunities in motorsport – it’s a crazy time. I’m pretty confident going into it, and I’m doing as much as I can with my fitness and to familiarise myself with the tracks.”

Last year, of course, was Middleton’s first racing a Lamborghini Huracan EVO and he absolutely starred in his maiden season at GT3 level. Ending his debut Lamborghini Super Trofeo Europe campaign third in the standings with team-mate Jack Bartholomew, the duo achieved three race wins and a total of eight podiums. They also took a top six best in the end-of-year ‘World Final’.

For the move Stateside, Middleton will continue to drive a Lamborghini Huracan but will team with Glaswegian racer Stevan McAleer at WTR. The squad, based in Indianapolis, is a major force in the North American series having won no fewer than seven titles.

Since the beginning of his car racing career, Middleton has been one of the standout drivers of his generation and has achieved a huge amount of success. Able to race in Ginetta Junior in 2015 after scooping the Ginetta Junior Scholarship, he impressed to win that year’s Winter Series title and was then main season Vice-Champion in the category the following year.

Making the move into GT endurance racing in 2017 in the British GT4 Championship, Middleton and Ginetta Junior rival Will Tregurtha teamed-up to win the coveted crown at their first attempt, as well as the Silver Cup class title, in a Ginetta G55 GT4.

Such was his prowess, Middleton also won the prestigious Sunoco Whelen Challenge – the youngest driver to ever do so – which earned him the phenomenal opportunity to travel to America for the first time and compete in the 2018 Daytona 24 Hours at the wheel of a Cadillac Dpi VR prototype.

Teaming with former Formula One racer Felipe Nasr, Toyota factory driver Mike Conway and Eric Curran, the quartet took a memorable second place finish – a truly remarkable achievement for Middleton on his prototype debut and maiden appearance at the world-renowned track. He also became the youngest driver to claim a podium in the event this century.

For the main 2018 season, Middleton continued his driving partnership with Tregurtha and graduated into the GT4 European Series with the trusty Ginetta G55. The duo only just missed out on the title on countback, when a car fire in the final race of the year triggered a vexing retirement.

“I think we did make a bit of an impression back in 2018 in the Rolex 24”, reflected Middleton, “It was a fantastic chance for me, to finish on the podium on my debut was an absolute dream come true to be honest. Hopefully by racing in America during the second half of this year I’ll be able to build my profile more as a driver and show what I can do out there again.

“I can’t wait to learn the tracks and get to know everyone in the team, I’m really looking forward to working with them. It’s obviously good I’ve got a full year of experience in a Lamborghini Huracan, it’s a totally different animal to anything else I’ve raced in the past. It should be a great season.”

Middleton is now preparing to head to the USA for the opening two races of the Lamborghini Super Trofeo North America season, which will take place at Road America, near Elkhart Lake in Wisconsin, this Friday, 7th August, and Saturday, 8th August.