Stuart Middleton made a strong and consistent start to his maiden campaign in the Lamborghini Super Trofeo North America over the weekend, where the British Racing Drivers’ Club (BRDC) Rising Star took top four finishes in the opening two races of the season at Road America in Wisconsin. 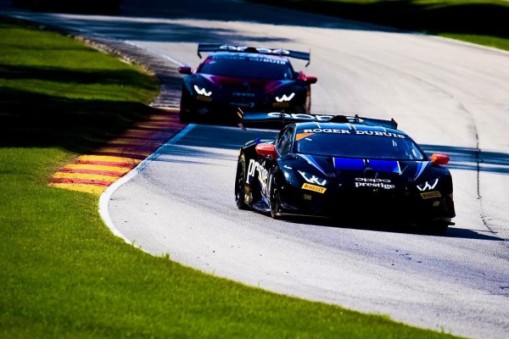 Marking the 20-year-old’s first year of racing in the USA, and his first visit to the famous track near Elkhart Lake, Middleton – along with team-mate Stevan McAleer – worked hard to extract the maximum from the No.1 Prestige Performance with Wayne Taylor Racing Lamborghini Huracan.

With some set-up issues to contend with throughout the weekend, and difficulties with tyre life in both races, Ashington racer Middleton and McAleer performed admirably in trying circumstances to take away the double top four result.

“It’s been great to race at Road America for the first time, and to work with the guys at WTR, but it has been a challenging weekend”, reflected Middleton, “We came here to win, so to come away with a couple of top fours is disappointing for all of us. All things considered, we maximised what we could with the car and got everything we could out of the weekend.

“It was a bit of a no-contest really, we couldn’t compete on pace with the podium guys so there’s a lot we need to change with the set-up and how the car works the tyres before the next one. I’ve got faith in the Wayne Taylor Racing guys, though, it’s one of the best teams in America and I’m sure we’ll be back stronger in Virginia at the next round.”

Learning the track in double-quick time during practice, Middleton was tasked with the round one qualifying session on Friday, 7th August, and delivered the third fastest time with a lap of 2m07.036 seconds (184.6 km/h). McAleer got behind the wheel of the No.1 car for the round two session and was fourth quickest with a time of 2m07.662 seconds.

Middleton went on to take the first stint of the opening race on Friday afternoon and at the rolling start he launched very well, but maintained third into Turn One. Although the top two cars were able to pull away, Middleton still managed to remain within two seconds of Steven Aghakani after 10 minutes of action and also keep chasing duo Brandon Gdovic and Corey Lewis at arm’s length.

As the race approached the mid-race pit-stop window Middleton had Gdovic filling his mirrors, but the former British GT4 Champion remained unruffled. When the first stops began to be served with just under half an hour to go, Middleton stayed on track and moved up into second position. Pitting the next time around, he handed over the WTR car to McAleer.

When the order settled the Scotsman was fifth overall and with 20 minutes left on the clock he was a couple of seconds behind the fourth placed car. Closing in more, McAleer eventually made his move on lap 20 to take the position which he held to the flag.

McAleer started round two on Saturday, 8th August, and moved up from fourth to third through the first turn, before concluding the first lap just 0.6 seconds behind Brian Sellers. Although the gap to the second placed car began to increase, McAleer also kept some distance to the chasing pack.

Remaining third to the pit-stops, McAleer – and the top two cars – all pitted at the end of lap 11 when Middleton got behind the wheel. Heading into the race with around 27 minutes to go, when the order levelled out after all stops had been completed he was in third position.

With less than 20 minutes to run, the North East Caravans-backed racer had to summon all of his skills to compensate for major grip issues. Defending impressively from Gdovic lap after lap, on the 18th tour he was powerless to do more and was edged back to fourth where he ended the race.

Rounds three and four of the Lamborghini Super Trofeo North America will take place just a fortnight from now, over the weekend 22nd/23rd August, at Virginia International Raceway.