A double podium for the Ferrari 488 GTE crews at the European Le Mans Series on the Paul Ricard circuit at Le Castellet, which began amid downpours and finished with the floodlights illuminating the track. Four intense hours which saw Spirit of Race take the top honours with the crew of Duncan Cameron, Matthew Griffin and Aaron Scott, while the all-female Iron Lynx squad made up of Manuela Gostner, Michelle Gatting and Rahel Frey claimed third spot. 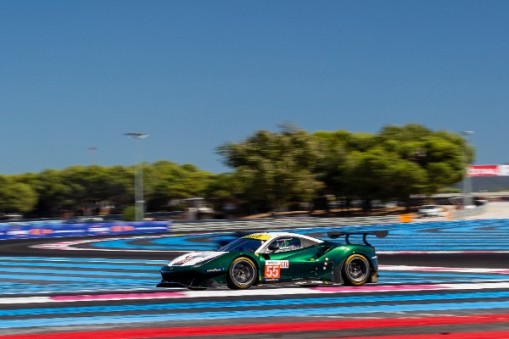 First hour. The race got underway behind the Safety Car due to the incessant rain which had pounded the French circuit for hours prior to the race, with participants having to wait five minutes for the green flag. The Proton Competition-run Porsche 911 crewed by Christian Ried, Michele Beretta and Alessio Picariello took command and was immediately hounded by the Ferrari 488 GTE. The best start was made the #60 Iron Lynx car with the Claudio Schiavoni, Rino Mastronardi and Nicklas Nielsen partnership, chased by the AF Corse entrant driven by Christoph Ulrich, Steffen Görig and Daniel Serra, and the Kessel Racing vehicle with Michael Broniszewski, David Perel and Marcos Gomes at the wheel. In fifth was the Spirit of Race 488 GTE handled by Duncan Cameron, Matthew Griffin and Aaron Scott, ahead of the other Iron Lynx entry featuring the all-female crew Manuela Gostner, Michelle Gatting and Rahel Frey, as well as the Ferrari courtesy of JMW Motorsport crewed by Gunnar Jeannette, Rodrigo Sales and Finlay Hutchison.

The battle began right off the bat with such intensity that the order behind the pacemaker underwent continuous changes over the opening laps. The rain finally abated at Paul Ricard, although the asphalt remained wet. Broniszewski attempted to undercut the field by changing tyres first and, once back on the track, began a comeback, notching up fast laps that in little time saw the driver move up into second position. Rays of sunshine were even beginning to break through, prompting a mass exodus into the pits with the exception of Proton Competition, who had chosen a diverse strategy that would see them wait well beyond the first quarter of the race before pitting.

Second hour. Kessel Racing’s Ferrari pulled off an impressive comeback to go into the lead, while the Porsche got overhauled by the Spirit of Race 488 GTE. However, there was still room for the Safety Car, whose entrance annulled all the gaps. With Frey in second place, almost all the frontrunners entered the pits simultaneously in a phase of the race where the floodlights were lit with the sun setting over the horizon.

Third hour. Once the racing got underway again, the Iron Lynx Ferrari took up the role of the hare, chased down by the cars of Spirit of Race and Porsche. The running order, however, remained crystallized, even after another round of pitstops as the race entered in the final, decisive stages.

Final hour. An accident then triggered a Safety Car call-out with the time needed to clear up the debris acting as an invitation for drivers to pit. The episode saw Matt Griffin take advantage to move the Spirit of Race 488 GTE into the lead ahead of Picariello’s Porsche and the #83 Iron Lynx Ferrari with Michelle Gatting at the wheel. Fourth place went to the Broniszewski-Gomes-Perel crew of Kessel Racing, followed by Schiavoni-Mastronardi-Nielsen in the second Iron Lynx 488 GTE, the AF Corse trio of Ulrich-Serra-Görig and the Jeannette-Hutchison-Sales partnership of JMW Motorsport.