The Nürburgring will host the second round of the Endurance Cup of the GT World Challenge Europe this weekend. Five Ferrari 488 GT3 Evo 2020s will be involved in the six-hour race. After the season debut at Imola where the Ferraris did less well than they deserved, with only the Sky Tempesta Racing car mounting the podium in the Pro-Am class, Prancing Horse teams will fight it out with forty-three other crews entered in the event. 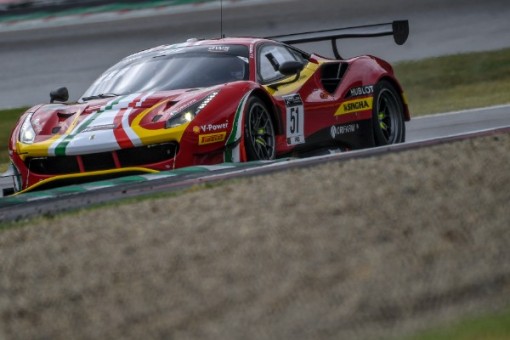 Pro. After showing promise at the Enzo and Dino Ferrari Circuit, Alessandro Pier Guidi, James Calado and Nicklas Nielsen will launch an assault on the podium, trying to pressurise the German cars, which start as favourite. The 488 GT3 Evo 2020 no. 51 of AF Corse will be joined by SMP Racing no. 72, again crewed by Davide Rigon, Miguel Molina and Sergey Sirotkin. At Imola, the trio were penalised with a drive-through when the podium was within his reach.

Pro-Am. There are three Ferraris in the Pro-Am class. Sky Tempesta Racing’s 488 GT3 Evo 2020, driven by Chris Froggatt, Edward Cheever and Jonathan Hui, who finished second in Italy, will be joined by Andrea Bertolini, Louis Machiels and Niek Hommerson at the wheel of AF Corse no. 52. In the Sprint Cup at Misano, the two Ferraris dominated the class, winning all three races. Rinaldi Racing will only take part in the Endurance Cup in Germany with Pierre Ehret, Rino Mastronardi and Daniel Keilwitz taking turns in the 488 that claimed fourth place at Imola.

Track. The Nürburgring’s 5.1km Grand Prix configuration offers drivers various combinations of corners, all very technical, where handling and acceleration can make all the difference. However, power is needed to exploit the two straights to take advantage of the few passing opportunities offered by the track. Temperatures will be cooler than at Imola and showers are possible on a track where the weather tends to be variable. For the first time this season, the public will also have the chance to see the SRO series drivers on the track.

Programme. After the private tests and the sessions for Bronze drivers on Thursday and Friday, free practice will be on Saturday morning, followed at 7:10 pm by the three qualifying sessions that will decide the starting grid. On Sunday, the six-hour race will start at 11:45 am.