PORSCHE TO START AT ROAD ATLANTA FROM POLE POSITION

At round six of the IMSA WeatherTech SportsCar Championship, the Porsche GT Team has claimed its fourth pole position of the season. Driving the No. 911 Porsche 911 RSR, Nick Tandy from Great Britain turned the fastest lap in the GTLM class at Road Atlanta setting a time of 1:16.167 minutes. His works driver teammate Laurens Vanthoor from Belgium planted the second works-RSR with the number 912 on position four. With this, Tandy added to his record in the North American sports car championship: The seasoned racing driver from Bedford has now secured a total of nine pole positions. In the GTD category, the Wright Motorsports customer squad takes up the six-hour race in the US state of Georgia from the third grid spot with the Porsche 911 GT3 R. 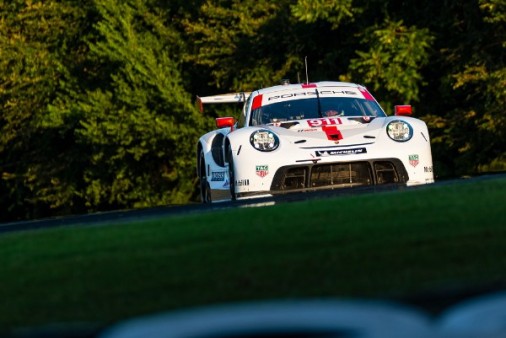 With an air temperature of 32 degrees Celsius and a track surface measuring 35 degrees, the two ca. 515-hp Porsche 911 RSR waited at the beginning of the qualifying session in order to get a free run and to conserve the tyres. After waiting for about five minutes, Tandy and Vanthoor joined the action on the track. For the first three laps, the two experienced works drivers drove cautiously to get the tyres to the ideal operating window. For the next three laps, they pulled out all stops – and fought for every last thousandths of seconds. In the end, Tandy was just 0.014 seconds ahead of the second-quickest qualifier, with only 0.078 seconds separating Vanthoor from the top. Rarely have the time intervals in the GTLM-class qualifying been so close.

In the GTD class for vehicles complying with the FIA GT3 regulations, the Wright Motorsports customer team secured a solid grid position for the race. Belgium’s Jan Heylen qualified the 500+hp 911 GT3 R on P3. Heylen shares the cockpit of the No. 16 car with the American works driver Patrick Long and his compatriot Ryan Hardwick.

Round six of the IMSA WeatherTech SportsCar Championship takes off on Saturday, 5 September, at 11.35 p.m. local time (5:35 p.m. CEST). In addition to the 24 Hours of Daytona, the Sebring 12-hour race and Petit Le Mans, the six-hour race at Road Atlanta counts towards the IMSA Michelin Endurance Cup.

Qualifying quotes
Steffen Höllwarth (Head of Operations IMSA Championship): “That was incredibly tight! Despite the notoriously fierce competition in the GTLM class, it’s never been this close. We’re delighted with pole position and we’ll take the extra motivation with us into the race day. We still have some homework to do before we start. In the practice sessions it was obvious that all competitors struggled to maintain a consistently fast pace over longer distances. It was the same for us. We’ll do some more work on the setup. In the race, the temperatures should be a little lower than on our first day today at Road Atlanta. Hopefully it’ll play into our hands.”

Nick Tandy (Porsche 911 RSR #911): “After the first two free practices we worked intensely on the setup. That was a huge help. The car’s balance was great. Another factor was that we got the timing perfect for our qualifying attempt. We’re thrilled with pole position, but we don’t want to overestimate it. The key to a good result in the race is to maintain a strong pace in the second half of each stint. If the tyres reach their limit, that separates the wheat from the chaff. I’m very curious to see how things turn out over the course of six hours.”

Laurens Vanthoor (Porsche 911 RSR #912): “I’m not particularly happy with the result. But that’s how it goes when the competition is that close. The car handled really well, and I managed to get a clean run, but ultimately I missed out by a hair’s breadth. We know exactly where we lost the fractions of seconds compared to the sister car. It’s obviously the setup. Now we’ll work with the engineers to tweak that before the start of the race.”