The race saw several highs and lows for the No. 57 Heinricher Racing with Meyer Shank Racing squad on Saturday. The six-hour endurance event brought together Misha Goikhberg, Alvaro Parente and Trent Hindman who fought through early damage to the race car to bring home a seventh-place result at Michelin Raceway Road Atlanta. 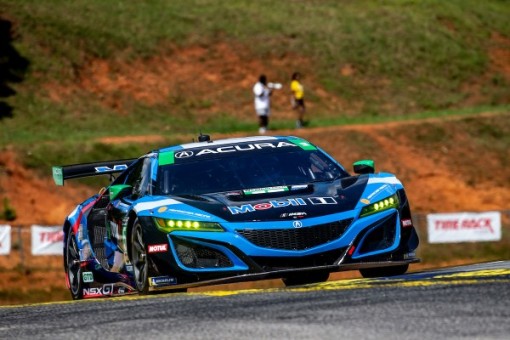 Goikhberg, making his fifth start for Heinricher Racing, safely guided the Acura NSX GT3 through a hectic start that saw several Prototypes spin in the middle of the track coming off Turn 12. He managed to escape without issue and advance two positions to fourth before the first full-course caution.

Unfortunately, midway through his first stint, Goikhberg spun in Turn 1 and grazed the wall, which resulted in damage to the hood of the No. 57 Acura. Several laps later that damage worsened, causing the hood and front left fender to detach along the front straight.

After Goikhberg pitted, to have what was left of the hood removed, Hindman took the wheel and made the most of his stint. The IMSA 2019 championship winner dealt with difficult driving conditions due to the damage, but pushed back into the top 10 before handing the car off to Parente with two and a half hours to go.

Parente advanced two additional positions during his double stint to position the Acura eighth before one final pit stop put Goikhberg back in the car to close out the race. Goikhberg and the entire Heinricher Racing team battled to the very end, gaining one more position to cross the finish line seventh.

Heinricher Racing will head to Mid-Ohio Sports Car Course on September 25-27 for the next round of IMSA WeatherTech competition.

Jackie Heinricher:
“Tough day today. And, even though this is not the level of performance we expect, I couldn’t be more proud of the grit this team showed today. To finish a six-hour endurance race and push to seventh with the severity of the car damage we had is a testament to the strength of the drivers, the crew and the Acura NSX. We always race hard. Today, it was about fighting hard. That’s exactly what we did. Also proud to congratulate our sister car and racing partner Meyer Shank Racing on their victory today. Well done!”

Misha Goikhberg:
“Today was a strong showing by the team and the No. 57 Acura NSX GT3 was fast. I made a mistake in Turn 1 and made contact with the wall. Unfortunately, the hood came apart after that and compromised our pace. Trent did a great job managing it without the hood. The team made a strong recovery to finish seventh. I’m looking forward to Mid-Ohio where we can hopefully pull out a strong result for the team.”

Alvaro Parente:
“Today was definitely a bit of a tough day. We had a really strong car and we were going into this race feeling pretty good. Even though we went two laps down we never gave up. That’s the spirit that we have to take with us to every race and our day will come. I’m very happy with the team and sister car winning the race.”

Trent Hindman:
“First off huge congrats to the whole Meyer Shank Racing team, Mario, Shinya, and Matt for bringing home the win with the No. 86. Obviously, we really wanted to get the No. 57 Acura NSX GT3 right up there with them but unfortunately it just wasn’t our day today. Big thank you to our Heinricher Racing/MSR crew for their excellent work all weekend and continuing to fight in a disheartening situation today. I’m really proud to be a member of this team and the Acura Motorsports family.”