K-PAX Racing was fully introduced into the GT World Challenge Powered by AWS Endurance Cup in mid-July, and using the lessons learned, was able to carry steam into the second round of action at Nürburgring (Germany). The team scored a top-10 finish in its second series showing, making steady improvement during an event highlighted by an intense six-hour showdown. 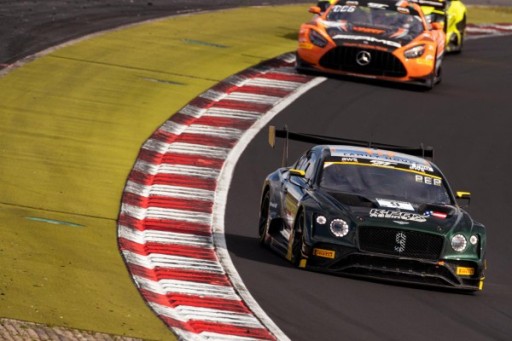 “Nürburgring was a great race for K-PAX Racing,” K-PAX Racing Program Manager Darren Law said. “We have been on a steep learning curve and with only two races under our belt, we have been able to show our speed. Lap times in qualifying in both races would have put us second overall, and in both races we have had a car in the top-10 in qualifying.”

Early in the race week, the team reassembled at their satellite shop located in Hellenthal, Germany –some 60 miles from Nürburgring – newly introduced two-year Bentley Motorsport driver Alex Buncombe to the operation to take the place of team veteran Álvaro Parente for the event, while still harnessing the same determination to spread its success across the globe. K-PAX Racing was able to present another top-10 caliber package in a field of 48 total cars, not only qualifying one of its Bentley Continental GT3s toward the top, but also competing alongside the series’ most elite.

The Continental GT3 showed its speed on the 17-turn, 5.137-mile circuit, qualifying its No. 3 car in 10th overall – the team and car’s second-consecutive top-10 performance (Imola – 8th). The No. 3 car’s combined qualifying (1:55.116) – each driver’s time is collected and averaged for the team’s starting spot on the grid – was highlighted by a speedy session from Jules Gounon, who recorded the second-quickest time in his session with a 1:54.283 and was less than three-tenths off the fastest lap. The No. 9 qualified 19th for the race (1:55.349).

The start of the race set the tone for the impending six hours, as the 48 cars in the field engaged in intense, fender-to-fender battles throughout its entirety. The No. 3, piloted by Rodrigo Baptista, sustained extensive left-front damage in the first corner of the opening lap by unavoidable contact – a multi-car incident which funneled the team’s Continental GT3 and other cars into making contact and drawing the race’s first full-course yellow. The team was able to get the car back out into the field momentarily, before sidelining it before the race’s first mandatory pit-stop. The No. 9, driven by Jordan Pepper, gained seven positions from the start and began his surge through the field.

Pepper, safely making his moves “one-by-one,” picked off one car on the restart and through his two-hour stint, bided his time and capitalized on battles around him. Pepper would make his first routine pit-stop in fifth position and by his final stop, wheeled the No. 9 into fourth with a four second gap – gaining 15 positions during his stint. Buncombe, who was second in line for the team’s two-hour shifts, spent the duration of his two, one-hour stints defending track position. K-PAX Racing was able to hold steady on the cusp of a top-five placing, as a late unrelated incident rewarded Buncombe with fifth again before passing off the wheel for the final time.

“The start was really crazy,” Pepper said. “I tried to make a few moves into the first turn, but unfortunately got pushed wide by one of the CMR Bentleys. Then I had to avoid the two spinning Ferrari’s. I think I made up one or two places – nothing too crazy. It was a bit unfortunate with Rodrigo [Baptista] and the No. 3, but it allowed me to pick up a few more positions. I settled into a good rhythm and just focused on picking them off one by one. I capitalized on their mistakes because it’s hard to pass here, and the guys were driving quite crazy and running into eachother. So, I just kept my nose clean so I could hand over a good, working car to my teammates because the race is so long. We ended up in fourth, and I’m super happy about that.”

The intensity of the race grew for the final stretch, as Andy Soucek was faced with heavy opposition from those making their final moves at the top of the field. Soucek was able to quickly pick up a spot to seventh following a full-course yellow at about a tick over the four-hour mark, and recouped one more position to sixth after a competitior ahead of him was forced to serve a penalty. With about 25 minutes remaining, Soucek engaged in a three-way battle between the No. 31 and 63 entry, and the No. 9 was at a time wedged between them and suffered superficial frontal damage. The long-time series vet was able to break away from the battle, boldly overtaking the two cars to fifth. Soucek would spend the rest of his stint trying to keep the hard-chargers at bay, ultimately crossing the line in sixth.

“It was unfortunate the No. 3 car was taken out early in the race, but we are all very proud that the No. 9 car went from 19th to sixth overall in a very competitive field,” Law said. “It was tough race and the driving is very aggressive. The competition is strong so you have to be fast and push hard the entire race. The team is working well – the pits stops were good and car preparation was good and Bentley has been a big help, especially this weekend in loaning us Alex Buncombe to fill in for Álvaro. We are looking forward to the next race. I can honestly say this is the best GT racing in the world.”

The finish not only gives K-PAX Racing its best finish in Europe, but also its first points in the series. Gounon has shown his strength in the series’ first two rounds of Endurance Cup qualifying, recording the fastest Bentley-made time and runner-up overall in nearly a 50-car field in both his sessions at Imola (1:41.231) and Nürburgring.

“I just love this feeling of going for one lap,” Gounon said. “It’s a part of the race week I really enjoy. I qualified second in Imola, Misano for Sprint again here at Nürburgring. So hopefully next time, we can get that top-spot. The car was great in qualifying but unfortunately, we couldn’t show that in the race.”

Alex Buncombe – No. 9 Bentley Continental GT3 (Race – 6th) – “I’m really happy that we were able to bring the car home in sixth for K-PAX Racing and Bentley. It was a really good first race on a personal level, and I’m really happy with the job I did. We started off the week a little unsure with the setup on the car after testing, and the boys did a great job to get the car fast enough for qualifying and the race. We had a really good race car at the end, which is what we were after in such a long race. Jordan [Pepper] started 19th and did a fantastic two stints – really, really mega. I did a couple of good stints, held my position and had a couple of really good battles with some cars – defending my whole stint. It was really tough for me, but handed it over to Andy [Soucek], who did pretty much the same thing as me – lots of defending. He unfortunately had a little bit of contact with a Lamborghini in the last corner for sixth, but a really good job to get the car home and get points for everyone. I had a very enjoyable week with the team and I hope to be back soon.”

Andy Soucek – No. 9 Bentley Continental GT3 (Race – 6th) – “What a race, starting 19th. If they told me that we would finish in the top-10, I’d already be happy, and to be fighting for the top-five was definitely a highlight. I can only thank everyone at K-PAX Racing for all their hard work and the good job they are doing in their first season. We were able to bring the car home, even if it wasn’t entirely in one piece. There was a bit of carnage to be fair because the Audi’s were flying at the end, and I struggled to keep them behind me. I had to fight really hard, and with a bit of contact, they were able to make moves. I’m happy to finish sixth in a race that was challenging for us. The big hero today was [Jordan], who climbed up the order in the opening stints to the top-five which was such an incredible performance.”

Jordan Pepper – No. 9 Bentley Continental GT3 (Race – 6th) – “You also have to be happy with the end result – sixth. We scored points – the first points for K-PAX Racing in Europe. I wish it was a podium, but starting from 19th, it’s not easy driving up to the front in this championship. We can be pleased and go fighting into Indy and the 24 Hours of Spa.”

Rodrigo Baptista – No. 3 Bentley Continental GT3 (20th) – “There is not much to say about the race – we were just unlucky in the first turn. But anyway, it’s racing and anything can happen. Qualifying was really good and we did another top-10, even though Max and I got some traffic on our laps. So it shows we have the speed and that K-PAX Racing is giving us a great and competitive car since the first day at Imola. It was a shame what happened at the race today – nothing i could do there but I just feel sorry for all the K-PAX Racing crew and my teammates Max [Soulet] and Jules [Gounon]. We need a bit of luck next time. Congratulations to K-PAX Racing and everyone from the No. 9 on the top-10 finish.”

Maxime Soulet – No. 3 Bentley Continental GT3 (20th) – “When you look at the big picture, it was pretty good. We were struggling a little bit earlier in the weekend trying to find a setup. Weather conditions were not in our favor with the wet and all that, but we were able to get the setup right for qualifying by trying something different. It was working. We had a really great qualifying again from the No. 3 car – qualifying in the top-10 again. Unfortunately, Rodrigo [Baptista] and I hit traffic again, and we would have been even higher in the order if we hadn’t. K-PAX Racing did a mega job once again giving us a strong car for the race.”

Jules Gounon – No. 3 Bentley Continental GT3 (20th) – “We had an issue on the first lap – bad luck again where we needed to retire the car. It’s painful for the team and for the drivers that we cannot fight, but hopefully the bad luck will be gone and that we can get a strong result for the team.”