CADILLAC RACING HEADS TO MID-OHIO AT TOP OF DPi POINTS

The IMSA WeatherTech SportsCar Championship is heading to the Mid-Ohio Sportscar Course for the Michelin Raceway Road Atlanta for the Acura Sportscar Challenge at Mid-Ohio to run September 25-27. 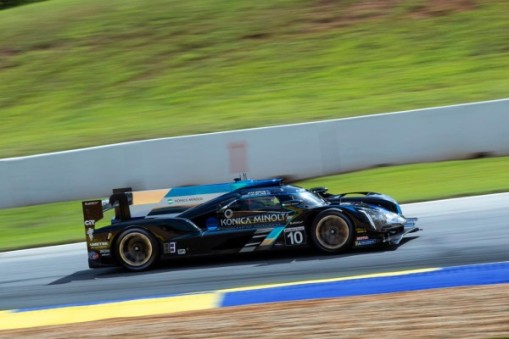 Mid-Ohio is a rolling terrain road course located an hour north of Columbus. The 2.4-mile, 15-turn track is best known for its signature Carousel and Keyhole turns as well as a key passing zone into Turn 4.

“Mid-Ohio is a track where all the manufacturers have done well, so far,” Van Der Zande said. “I believe the competition will be very good, so we’ll see how that turns out. I have not had a podium in the past two years at Mid-Ohio, so I’m very keen on collecting a lot of points first of all, along with a podium for Wayne Taylor Racing. I’m very happy to be getting back in the No. 10 Konica Minolta Cadillac DPi-V.R this weekend at Mid-Ohio!”

Felipe Nasr and Pipo Derani have been fast all year in the No. 31 Whelen Engineering Cadillac DPi-V.R and are focused on another podium finish this weekend.

“We’re heading into this weekend knowing that it’s going to be a difficult one for the Cadillac, as it’s proven in the past,” Derani said. “But nevertheless, Whelen Engineering/Action Express has always worked really hard going into each race with the expectation to win. It’s not going to be any different this time around. We’ve had three podiums so far and we hope we can continue that this weekend. A podium would be great, but we’re definitely going to go for the win. The championship is really tight right now between all of the guys in front and every point is going to make a difference in the end. Mid-Ohio is not an easy track because it’s really tight. It makes it difficult to pass and fight GT traffic. But, with perfect execution, we believe we can come out on top.”

Joao Barbosa and Sebastien Bourdais have been running strong and consistent races all season maximizing every opportunity and scoring points. The JDC-Miller Motorsports team has kept the Mustang Sampling Cadillac competitive all year by a string of podium finishes.

“Looking forward to this weekend,” Barbosa said. “It is a great racetrack, very technical and challenging. We will see if it is going to suit our Mustang Sampling Cadillac DPi-V.R. In the past we have not been very quick there, with the Cadillac being the heaviest of the DPi cars. We have a great team behind us. The JDC-Miller guys have been keeping us in the championship all season. It will be important to keep getting up on the podium and scoring valuable points.”

The No. 85 JDC-Miller Motorsport Cadillac DPi-V.R will have Tristan Vautier with new to DPi competition Gabriel Aubry. Aubry has several starts in IMSA LMP2 competition as well as drives in WEC with Jackie Chan DC Racing in the P2 Class.

“I am really looking forward to going back to Mid-Ohio,” Vautier said. “It is another one of the old school type American tracks that I enjoy. There are a lot of medium speed corners that suit the power of our Cadillac DPi-V.R so hopefully that plays in our favor. The team has gained some momentum this year and we want to keep that going. We are welcoming Gabriel to the team. He has been superfast in everything he has driven this year. We will help him get up to speed and I am looking forward to driving with him this weekend.”