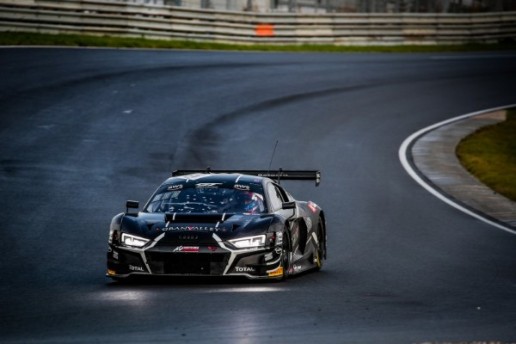 The result owed a great deal to Tomita’s choice of rubber. The #31 crew started from third on the grid with a set of Pirelli’s rain tyres fitted to their Audi, while both front-row qualifiers elected to begin with slicks. The track was already damp and became considerably wetter when a shower hit the Dutch track, which proved disastrous for pole-sitter Mikaël Grenier (#14 Emil Frey Racing Lamborghini) and second-place starter Jim Pla (#89 AKKA ASP Mercedes-AMG).

Both quickly dropped down the order as the wet-shod cars found vastly better traction around the 4.2km circuit. Tomita surged into the lead almost immediately and was joined at the front by Giacomo Altoè (#163 Emil Frey Racing Lamborghini) who climbed from 10th on the grid to run second throughout the opening stint, never falling far behind the leader.

But there was drama to follow when Altoè’s rear left tyre delaminated on the pit straight shortly before the Italian had been set to make his scheduled stop. The Lamborghini driver was forced to limp around for an entire lap at reduced speed, ending the victory hopes of another Emil Frey Racing entry.

Tomita handed over to Audi factory ace Van der Linde, who looked typically assured at the head of the field. The real action was taking place behind him, where a pair of impressive Silver Cup runners were battling for the second step of the overall podium. Hugo Chevalier came off best in the #108 CMR Bentley, passing Simon Gachet (#26 Sainteloc Racing Audi) with 20 minutes left on the clock.

There was yet more drama behind as a gaggle of cars fought over position, including the top Pro-Am runners. The class lead changed hands on several occasions with first Andrea Bertolini (#52 AF Corse Ferrari) and then Nick Foster (#20 SPS Automotive Performance Mercedes-AMG) holding the advantage.

But in the closing stages it was Eddie Cheever III (#93 Sky Tempesta Racing Ferrari) who moved into the lead after a back-and-forth battle with Foster’s Mercedes. While they were competing for class honours, Jules Gounon (#107 CMR Bentley) and Thomas Neubauer (#15 Tech1 Lexus) were also involved in a multi-car scrap for position.

This was in stark contrast to Van der Linde, who took victory by a commanding 30 seconds from Chevalier. The French driver captured a fantastic result for his CMR squad, as well as a maiden class win alongside teammate Pierre Alexandre Jean. Gachet took third overall and class runner-up in the car he shares with Steven Palette.

Albert Costa was fourth in the #163 Emil Frey Racing entry, despite struggling with damage to the rear of his Lamborghini following the earlier tyre blowout. Gounon took fifth, followed by the #90 Madpanda Motorsport Mercedes-AMG, the #15 Tech1 Lexus and the #55 Attempto Racing Audi. The Pro-Am leaders completed the top 10, with Cheever taking a third win of the campaign alongside Chris Froggatt and the #18 ERC Sport Mercedes-AMG of Lee Mowle and Phil Keen securing a season-best finish.

Despite the challenging conditions the race was impressively clean. Just one car failed to finish, while the only full-course yellow period was called to remove Altoè’s shredded tyre from the track. The day’s second race begins at 13.45 CET and will give the #14 Emil Frey Racing Lamborghini another opportunity to capitalise on pole position. Norbert Siedler will start first, sharing the front row with teammate Costa. But with more rain possible, there is every chance of another unpredictable contest this afternoon at Zandvoort.

Kelvin van der Linde, #31 Belgian Audi Club Team WRT: “It was awesome! I have to thank Ryuichiro, he made the call for the wets this morning. Our car has been a dream all year. It was a difficult race because you have everything to lose in tricky conditions. I really had to focus and it looked easier than it really was. We’ve scored good points for the championship overall and in Sprint, so it was a good job by the boys today.:

Ryuichiro Tomita, #31 Belgian Audi Club Team WRT: “I took the start and I passed them all. Thanks a lot to our team, they trusted me and my decision. I was quite confident, the tyres were good but a bit difficult in the beginning. A very happy day for me.”

Pierre Alexandre Jean, #108 CMR Bentley: “The conditions were very hard. It was a crazy race but we had a very good strategy, we decided to start with wet tyres and a dry set-up. I did a crazy fast lap, and after that I tried to survive, take care of my tyres and finish my stint. I knew that Hugo would do a good job after and he did, it was perfect.”

Hugo Chevalier, #108 CMR Bentley: “What a race! The start with the wet tyres was the perfect choice. Very happy and thank you for the team for the perfect car.”

Chris Froggatt, #93 Sky Tempesta Racing Ferrari: “The last four or five laps were pretty exciting, Eddie battling with the Mercedes. The slicks were better most of the time but the guys on the wets were able to defend. Eddie was under a lot of pressure to pass and it was tricky, but he did a mega job and we’re super happy.”

Eddie Cheever III, #93 Sky Tempesta Racing Ferrari: “The car was amazing. We went on slicks and I had to find reference points and then I had a good battle with the Mercedes. He was good on the brakes because he had rain tyres and I was good on the acceleration. We won, so good points in the championship.”