The Acura Sports Car Challenge weekend started strong for the Heinricher Racing with Meyer Shank Racing Acura NSX GT3 as changes on the No. 57 translated to an increase in performance on the track for drivers Misha Goikhberg and Alvaro Parente. 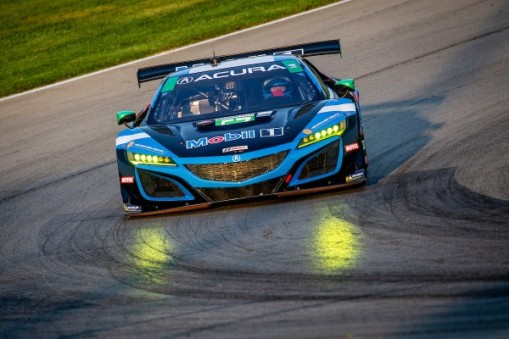 Race day began with early morning qualifying. Goikhberg made an impressive qualifying run in the No. 57 Acura, advancing from sixth to second after posting a 1:21.196-second lap. As the session came down to the final lap, that time held up for third on the grid for the Sunday afternoon race. The qualifying run marked Goikhberg’s best starting position of the season—surpassing his previous best start of sixth at Michelin Raceway Road Atlanta.

Taking the green flag, Goikhberg drove one of his strongest stints to date for Heinricher Racing. He made an early breakaway and, by managing constant lap traffic, was able to increase his gap over the cars behind—strengthening his third-place position.

When the first full-course caution came early in the race, Goikhberg came into pit lane for a short fill and returned to the track once again fighting in the top three. Running strongly in third, Goikhberg was called back into pit lane on lap 63 in anticipation of a yellow flag—which came one lap later—to put Parente behind the wheel. Unfortunately, an error on the pit stop sent Parente to the back of the pack to restart ninth.

With the field packed up for the remaining hour of the race, Parente pushed the performance of the Acura NSX to make up positions. He was able to climb back into the top five in the final 30 minutes of the race and ultimately earned a sixth-place result.

The next round of IMSA action will be at the Charlotte Roval on October 9-10.

Jackie Heinricher:
“We made a big jump in performance with the car this weekend. I think we saw that in Misha’s strong qualifying run and the ability of Alvaro to fight back after the misstep in the pits. This is where we expect to be every race—competing for podium positions.”

Misha Goikhberg:
“It was a disappointing race for us. The team did a phenomenal job setting up the Acura—it was quick all weekend long. It was consistent and we had really good tire wear during the race. Unfortunately, a mistake during a pit stop cost us dearly. We definitely had the pace for a podium or perhaps even higher. As always, we will reset and come back stronger at the next one. Big thank you to the entire team for their hard work this weekend.”

Alvaro Parente:
“Unfortunately, we took a chance and the last stop didn’t go our way. It could have gone really well but, in the end, it didn’t. We’ll just keep fighting and see what we can do in the next races. On a good note, Misha had a good stint, and if the stop would have worked out, I think we could have finished really well.”