Cadillac Racing driver Michael Cooper drove to a podium position of third in today’s running of the Pirelli World Challenge GT Championship presented by Cadillac race at Road America. O’Connell’s electrical issue resurfaced and he was classified in 20th place. 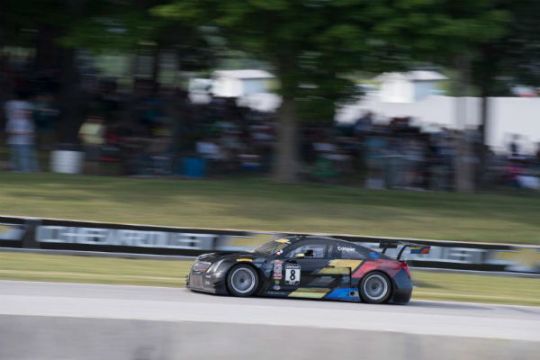 Based upon their fastest lap in yesterday’s race, O’Connell (Flowery Branch, Ga.) and Cooper (Syosset, N.Y.) started sixth and ninth respectively for today’s 50-minute event. At the drop of the green it appeared that O’Connell’s electrical woes from yesterday were fixed. However, as a full caution flew on lap one he reported that the misfire was back. On the restart Cooper was in sixth and focused on getting to the front. On lap nine he passed the Porsche of Pat Long and soon after the Nissan of Bryan Heitkotter slowed on the track putting the New Yorker into fourth. Four laps later around the four-mile, 14-turn undulating road course he was able to pass local hero P.D. Cunningham’s Acura for the final podium position finishing in third.

“I got less than an ideal start,” Cooper said. “I got squeezed into the grass at the start and I didn’t want to push the issue. Pat and I had a good race down into Turn 5. I could tell I had a little more pace and I was able to set him up going into Turn 1. I chased down Cunningham and was able to get him into Canada Corner. The Bentley was very strong with their big downforce. Going through the Carrousel it would upset the front of my car. Finishing on the podium almost feels like a win today.”

O’Connell had his electrical Gremlins return.

“Clearly disappointed,” O’Connell said. “It is not an easy sport. We have a lot of technology in these cars. The Cadillac Racing guys replaced everything they could last night. It is tough. That is three races in a row that I felt like I had a podium car and something happened. I am happy for Michael to get his Cadillac ATS-V.R Coupe up on the podium. For me, my championship hopes for five in a row are pretty much over. We will come back at Mid-Ohio in four weeks and go for wins.”