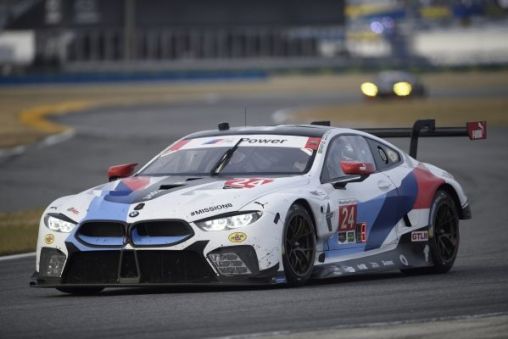 Both cars showed great reliability and managed to complete the tough endurance classic without major technical issues in the maiden race appearance for BMW Motorsport’s new GT flagship car. No other new BMW GT race car has ever been more reliable on its debut. This was the good news for all involved at BMW Motorsport and in BMW Team RLL. Considering the given Balance of Performance (BoP), it was obvious, even before the start of the race, that the two BMW M8 GTE cars would be out of contention for top positions. More important was the fact that the new car was able to master the challenge of a 24-hour race from the word go.

“Our BMW M8 GTE successfully completed its baptism of fire here at Daytona,” said BMW Motorsport Director Jens Marquardt. “To finish such a tough debut race with both cars after 24 hours without major technical problems is something we can be more than proud of. Everything has been said with regards to the reasons for the gap in performance compared to the competition. The car couldn’t show its true potential yet. That’s why BMW and IMSA will continue their productive and open talks and have agreed to find an appropriate BoP assessment for the upcoming events starting with Sebring, allowing the BMW M8 GTE to show its true performance for the benefit of the series, BMW and all of our fans.”

Marquardt added: “As a matter of fact we sent a great GT car into action that holds huge potential for the future. Everyone at BMW Team RLL and at BMW Motorsport gave their all to get the most out of this race under these difficult conditions. In the coming race appearances we are set to be stronger, and we want to fight for top positions. The BMW M8 GTE has got all it takes to do so in any case. Many team members in Munich and at BMW Team RLL in North America have worked very hard in preparation for this race over the past months. My compliments go to everyone involved. This was an impressive team effort displaying a lot of passion. I’m particularly happy about the strong debut race of the BMW M4 GT4 in the Continental Tire SportsCar Challenge. The fact that our teams managed to finish second and fourth in the first race of the season shows that we are absolutely on the right track with this car.”

BMW and IMSA have been working together for years in a very positive and constructive manner. The BoP system is an integral part of global sports car racing including the IMSA WeatherTech SportsCar Championship. BMW and IMSA will continue productive, open talks and have agreed to find an appropriate BoP assessment for the upcoming events starting with Sebring (USA), allowing the BMW M8 GTE to show its performance for the benefit of the series, BMW and the fans.

The spectators were treated to a kind of unusual season opener. The anticipated rain didn’t come on Sunday. Only a heavy shower at the start of the sixth hour brought extra action in the pit lane. In addition, many teams suffered punctures over the course of the 24 hours of racing. Apart from that, relatively few incidents occurred, with only four full-course cautions. Never before were more laps completed at Daytona than in this year’s edition of the race.

In the sixth hour, the four drivers of car number 25 suffered a blow, when the BMW M8 GTE’s right front tyre burst after Auberlen hit debris on the track. Following 30 minutes of repair works, the BMW NA Brand Ambassador was able to rejoin, 17 laps behind the leaders. A strong result was impossible after that early setback. More repair pit stops followed as a result of that incident. Ultimately the number 25 BMW M8 GTE took the chequered flag in ninth after 731 laps.

The drivers of car number 24 delivered a consistent and flawless performance, trying to get the maximum out of the race under the given circumstances. Final-stint driver Edwards crossed the line in seventh.

Further reactions to the Rolex 24 at Daytona.

Bobby Rahal (BMW Team RLL, Team Principal): “It’s been a tough weekend for everybody at BMW Team RLL running a new car for the first time. I’m very proud of the job the whole team has done during the past months – working flat out to prepare the two BMW M8 GTEs for this race. You always have concerns regarding reliability in such a situation but I have to say, that both cars have run very well from that standpoint. To make it to the end in a 24-hour race with a new car is pretty good, I think.”

John Edwards (#24 BMW M8 GTE, seventh place): “At the Roar and during the race weekend we didn’t have the necessary pace for the known reasons. Having said that it’s good that we managed to score some points for the championship. Our car made it to the finish without major problems. That’s at least a small win this weekend.”

Jesse Krohn (#24 BMW M8 GTE, seventh place): “For me personally it has been a great weekend. My first race weekend with BMW Team RLL went very well, although there weren’t many opportunities for me to test the car. The hours I had in the car during this race were important for me in terms of getting familiar with it. So all in all the Daytona 24 Hours have been a big step for me getting perfectly prepared for the whole season.”

Nick Catsburg (#24 BMW M8 GTE, seventh place): “It was great to be part of the race debut of the BMW M8 GTE. For sure it was unfortunate that we were not able to fight for better positions. Nevertheless we gave everything. The car was pretty reliable. We had some tyre damage but we saw that very often in this race. I am impressed how stable the BMW M8 GTE was here. Our time will come.”

Augusto Farfus (#24 BMW M8 GTE, seventh place): “I think it is a great achievement to have completed the first tough 24-hour race for the new BMW M8 GTE without any significant technical problems. Due to the car’s BoP we were not where we wanted to be, but we showed great team spirit and fought to the very end. A big thank you to the entire team. Now I am looking forward to the next stop of my tour around the world at Bathurst.”

Connor De Phillippi (#25 BMW M8 GTE, ninth place): “The BMW M8 GTE has very good balance and is a really good car to drive. I think that it is much faster than we were able to show here at Daytona but overall we can be proud of our work. We were able to gather a lot of valuable data for the remaining season.”

Alexander Sims (#25 BMW M8 GTE, ninth place): “It was good to see that the BMW M8 GTE has a lot of potential. We now need to extract that as we’re obviously not happy with this result. But it’s been a really good car to drive through the race. I think the team did a very good job and we have learned a lot.”

Philipp Eng (#25 BMW M8 GTE, ninth place): “This was my second start at Daytona – and I enjoy this race a lot. It’s a different way of racing compared to Europe. The atmosphere is a bit more relaxed. I really like it. We had a great car in terms of balance and driveability. I enjoyed every single lap despite the fact that we weren’t there in terms of performance for known reasons.”

Bill Auberlen (#25 BMW M8 GTE, ninth place): “I had my big moment on Saturday evening when my right front tyre exploded at 170 mph. I was very lucky that the car stayed off the wall and I could avoid a crash. Although we couldn’t fight for top positions here at Daytona my general impression is that the BMW M8 GTE is the best GT car I’ve ever driven. I hope we’ll be able to show that great potential soon.”