The 2018 Pirelli World Challenge season draws to a close this weekend at Watkins Glen International, and Flying Lizard is making a final push for the GTS championship title with its pair of Audi R8 LMS GT4s. 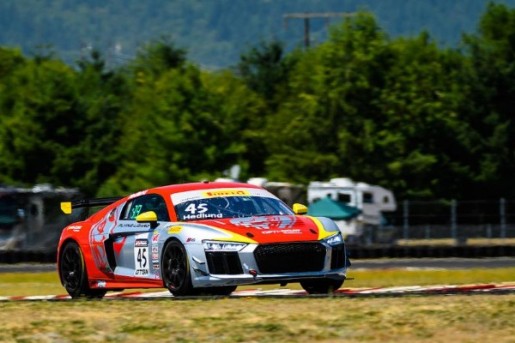 With five podiums earned this season, Mike Hedlund, driver of the No. 45 Audi R8 LMS sits third in the GTSA point standings with just 22 points separating him from points leader Drew Staveley. A maximum of 50 points remain up for grabs heading into the double header event at Watkins Glen.

The Format
The two-driver, sixty minute format of the SprintX championship ended in the previous round at Utah Motorsport Campus, and this weekend, the series will return to 50 minute sprint races with one driver in each car. Under the Pirelli World Challenge Sprint format, pit stops are not required, and the 24 GTS and GTSA cars will run interrupted at the wave of the green flag.

The Drivers
After stepping back from the SprintX double header at Utah Motorsports Campus, Mike Hedlund will return to the No. 45 Audi R8 LMS to make a final fight for the GTSA championship title. Hedlund has earned five podiums this year, finishing in the top three at the Grand Prix of St. Petersburg, Circuit of the Americas, VIRginia International Raceway, Road America, and Portland International Raceway.

Adam Merzon will finish out the 2018 season solo in the No. 23 Audi R8 LMS, with SprintX co-driver Ryan Eversley on hand to act as his coach. Merzon has earned five top ten finishes this season, increasing his speed and race craft as the season has progressed.

The Track
Located in the Finger Lakes area of New York, Watkins Glen was originally created in 1948 as a 6.6 mile street course in downtown Watkins Glen, New York, using public roads to create the circuit. In 1956, the track moved to a permanent location, undergoing various changes and renovations throughout the decades. Now an 11 turn, 3.4 mile permanent road course, the track hosts a variety of racing from IndyCar to NASCAR.

Flying Lizard only raced at Watkins Glen International once in 2014, earning a seventh and a 14th place finish with its pair of Audi R8 LMS cars in the TUDOR United SportsCar Championship.

The Engineering: From Team Engineer Jim Bell
Watkins Glen, unbeknownst to most people, is significantly tough on brakes. Taking care of our brakes and brake temperatures for the later parts of the race will be important.

It’s a fast track with a lot of elevation changes. We’re lacking a little bit on the power that we’re allowed, so passing in a straight line will be a little challenging. We have to concentrate on getting in and out of the bus stop well, getting through the boot, and the exit of turn one.

Our focus will be to be agile, quick, and to outbreak our competition where we can. It will be about getting into the turn, braking better, and getting up to speed on our exits faster. If it rains, the Audi R8 LMS set up should be good here.

Tune-In
Fans can stream the race feed live for free on the Pirelli World Challenge stream page or the PWC YouTube channel. Race one will go green on Saturday, September 1 at 4:10PM, and race two will begin Sunday, September 2 at 11:05AM Eastern. Live timing and results for the event will be available on the TSL event page, and Flying Lizard Motorsports will offer live updates throughout the event on twitter.

Driver Quotes
Mike Hedlund | No. 45 Audi R8 LMS GT4 | GTSA Class
After having our fair share of bad luck throughout the season, we still have an outside shot at the Sprint Championship! I love Watkins Glen and have had good success there in the past, winning the Six Hours of the Glen in 2015. Rain or shine I’m looking forward to having some fun and pushing our #45 Flying Lizard Opti-Coat Audi R8 GT4 to its limit! Hope to see all the local Flying Lizard fans out at the track this weekend!

Adam Merzon | No. 23 Audi R8 LMS GT4 | GTSA Class
I can’t think of a better place to finish the season then in New York at Watkins Glen. I’ve raced here many times and think that the smooth surface and flowing nature of this track suits my driving style and should be good for our Case-It Racing Audi. This Flying Lizard team brought some fast cars to Utah and I think that’ll carry over here at the Glen as well. Hoping we can end the year on a high note with a good result.