McLaren Automotive has confirmed a stellar driver line-up for the competitive debut of the 720S GT3 in the Gulf 12 Hours at Abu Dhabi on December 13-15. Lining up on the grid will be McLaren Automotive Factory Driver Ben Barnicoat (GB), joined by Alvaro Parente (PT) and Shane van Gisbergen (NZ). 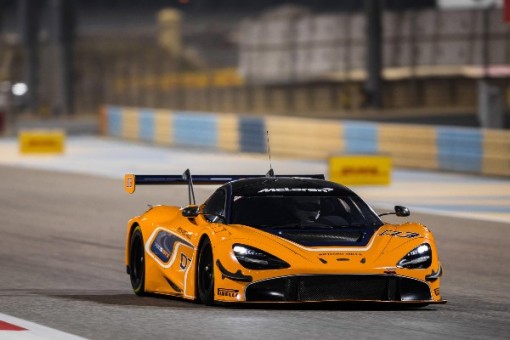 The star trio boasts an impeccable pedigree, with Parente and van Gisbergen both holding Platinum status under the FIA driver-rating system – the highest available – and Barnicoat ranked as Gold. With such a strong line-up, the works-entered car – entered under McLaren Customer Racing – is an exciting prospect for the Gulf 12 Hours. Now in its eighth year, the endurance event will see a combined grid of over 30 GT3 and GT4 cars battling for outright honours over a two-part race, each of six hours’ duration, on the 5.554 km Yas Marina circuit – home to the Abu Dhabi Grand Prix.

Barnicoat, 21, leads the three-driver line-up with extensive mileage completed in the new Super Series GT3 model during the rigorous development programme as part of his role as a McLaren Automotive Factory Driver. The outing also marks the young Briton’s debut appearance in the Gulf 12 Hours, but Barnicoat brings a wealth of McLaren endurance racing experience from the past few seasons which has seen him contest the Suzuka 10 Hours, Bathurst 12 Hour race and the Blancpain GT Endurance Series, which includes the 24 Hours of Spa event.

The confirmation of Parente and van Gisbergen is a re-pairing of two of the most exciting names in GT3 racing. They have extensive experience at the wheel of various McLaren models, and both have enjoyed significant success with the brand in recent seasons. Between them, the duo has secured race and championship wins across Europe, North America and Australia, the most notable result coming in 2016 at the Bathurst 12 Hour race with pole position, lap record and overall victory.

Álvaro Parente, 34, makes a return to the track in a McLaren following several seasons campaigning with the brand across Europe, Australia and North America. The Portuguese driver contested the Gulf 12 Hours in 2014, securing a podium finish with the 650S GT3 on its debut, and went on to enjoy significant success on the world stage at the highest level with the car, including a dominant season in the Pirelli World Challenge where he secured driver, team and manufacturer honours at the wheel during the 2016 campaign.

Sharing the same home town of Auckland in New Zealand as company founder Bruce McLaren, Shane van Gisbergen brings a further wealth of race-winning experience across a range of disciplines, most notably in GT3 and V8 Supercars. Van Gisbergen first raced in a McLaren during the 2014 season, and won the Blancpain GT Series Endurance Cup in 2016, the same year in which he claimed the International V8 Supercars Championship title. Like Barnicoat, the 29-year old New Zealander will run at the Gulf 12 Hours for the first time.

“The Gulf 12 Hours is a stern test for the car but with the development mileage we have accumulated and with the fantastic driver line-up we’ll be able to gauge the potential of the new McLaren 720S GT3. We’re confident that we’ve put the new car through a comprehensive development programme, with lead driver Ben Barnicoat taking a critical role in the process. Teaming him up with Alvaro Parente and Shane van Gisbergen, two excellent racers who both have extensive GT racing experience with McLaren machinery, it should make for an interesting competition debut for the car.”

This exciting full-Pro entry by McLaren Automotive in the Gulf 12 Hour race comes as the 720S GT3 continues to progress through an intensive testing and development programme. The development prototypes of the first car designed and built by McLaren Automotive’s in-house motorsport department have completed testing at circuits across Europe and, most recently, the Middle East. Working extensively with tyre partner Pirelli in a variety of weather conditions, the development team has simulated sprint and endurance race distances and gathered significant levels of data to optimise the performance and set up.

The race debut for the 720S GT3 follows its first public appearance at the recent Bahrain GT Festival. As a live race environment, and against one of the most competitive grids in the event’s history, this latest test at the Yas Marina circuit will be the car’s most demanding challenge to date.