For Mercedes-AMG, last year’s ADAC GT Masters season could hardly have been more thrilling: while MANN-FILTER Team HTP Motorsport sealed the teams’ title in the penultimate race of the season, the drivers’ title was lost due to innocently becoming involved in a collision in the final race. This year, the motivation to achieve the double with drivers’ and teams’ title is all the bigger. The last time this could be achieved was in 2012 and Maximilian Götz was already involved at the time. The Mercedes-AMG Driver, who came close to winning the drivers’ title last year, will be racing together with a new partner behind the wheel this year: Indy Dontje will be alternating with Götz in the #47 MANN-FILTER Team HTP Motorsport Mercedes-AMG GT3. In 2018, Dontje ended up fifth in the ADAC GT Masters. 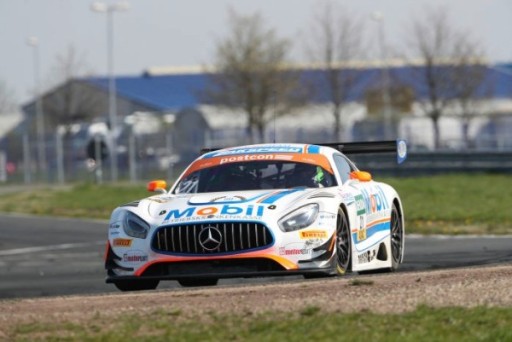 For this weekend’s season opener at Oschersleben, the motorsport world will also be watching the sister car of the team from Altendiez closely: the #48 Mercedes-AMG GT3 will have Fabian Vettel and Philip Ellis as its drivers. The 20-year-old brother of four-time Formula 1 World Champion Sebastian Vettel will be making its debut in the super sports car league. With 26-year-old Ellis, who managed to win the ADAC GT Masters season opener at Oschersleben last year, Vettel will be part of a strong junior pairing that can be good for surprises.

The field of 31 cars that will get the season underway in the Magdeburg region also includes a pair of Mercedes-AMG GT3s run by Team Zakspeed BKK Mobil Oil Racing: Kelvin Snoeks (NED) and Mick Wishofer (AUT) will be racing with starting number 20 while Jimmy Eriksson (SWE) is sharing driving duties in the #21 car with former DTM driver Jeroen Bleekemolen (NED). The car with starting number 36, run by Customer Racing Team Schütz Motorsport with Marvin Dienst (GER) and Aidan Read (GBR) is rounding out the GT3 entries from Affalterbach.

This season’s ADAC GT Masters includes seven rounds with 14 races: four rounds will be held in Germany, the remaining ones at Most (CZE), Spielberg (AUT) and Zandvoort (NED). Each round includes a one-hour race on Saturday and one on Sunday with a driver change at the halfway mark. A new points scale is to make the battle for the title in the series, which is already thrilling anyway, even more balanced: instead of the first ten in every race, now, the best 15 will be scoring points for the championship classification. The battle for the titles will be decided at the Sachsenring at the end of September (27-29 September).

Maximilian Götz, MANN-FILTER Team HTP Motorsport #47: “For us, there is only one goal this season: being on the top at the end and winning the championship. It would be bold to say it will be an easy ride. But last year, we had a strong performance at every track, apart from our unfortunate retirements at the Hockenheimring and the Sachsenring. Indy is the optimal addition to our team which was already strong anyway. He knows the car, HTP Motorsport and the ADAC GT Masters. Surely, the new points scale will be playing a role in the teams’ tactics. Perhaps, you sometimes have to make do with a twelfth-place and just take in these points to win the title.”

Indy Dontje, MANN-FILTER Team HTP Motorsport #47: “I am really looking forward to Oschersleben and to making my comeback at the MANN-FILTER Team HTP Motorsport. It is great that the team has given me the confidence again to take on another full season together. I know the team very well and I think we will have a strong package. With Maximilian Buhk, I ended up fifth last season. With Maximilian Götz, I want to battle for the championship this year. As a driver pairing, we fit together perfectly. The season opener at Oschersleben will certainly be exciting, a difficult and tight circuit. But we are well prepared.”& amp; lt; /p>

Fabian Vettel, MANN-FILTER Team HTP Motorsport #48: “My pre-season preparation went really well. I quickly got used to the Mercedes-AMG GT3 and can cope with the car really well. It is a huge honour being able to race a full ADAC GT Masters season with it. After the official test days, I am looking forward to the start, the team and the co-operation even more eagerly. For me, Oschersleben is a new track with a GT3 car, but I did well in testing. Now, the full focus is on the race weekend. I can’t wait for the action to start!”

Stefan Wendl, head of Mercedes-AMG Customer Racing: “This year, again, the ADAC GT Masters is a highly interesting race series with motorsport at the highest level. With our Customer Racing Teams and the balanced driver pairings with well-known top drivers behind the wheel of the Mercedes-AMG GT3 as well as young talents, our chances are good to be in contention for the title again this year.”