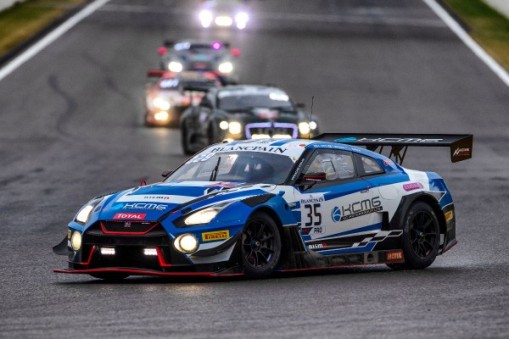 Returning to the racing calendar for the first time in 37 years, the Kyalami 9 Hour represents the last round of KCMG’s 2019 campaign with the Nissan GT-R NISMO GT3, as the team looks to build on its sixth from the Suzuka 10 Hours last time out.

2017 Le Mans 24 Hours LMP2 winner Jarvis is one of the few entries to have contested an international race in South Africa, having done so for Great Britain in the 2007-08 A1 Grand Prix series on the Durban street circuit, but this will be his first visit to Kyalami.

Team-mate Imperatori arrives to the 4.522 km circuit straight from his second FIA GT World Cup appearance in Macau. The Swiss driver and Jarvis are once again joined by Liberati, with the trio looking to break back into the points after suffering bad luck in the previous two races.

In the sister #35 car, De Oliveira returns to KCMG after starring at the Nürburgring 24 Hours earlier this year with the Hong Kong squad. The Brazilian raced for Nissan in Super GT from 2006 to 2018 and adds more than 20 years of racing experience to KCMG’s line-up.

His team-mates for this weekend, Burdon and Chiyo, have shown front-running pace throughout the 2019 IGTC campaign, taking two fastest laps at Bathurst and Laguna Seca, before finishing a season-best sixth at Suzuka.

Practice for the Kyalami 9 Hour begins on Thursday, with qualifying getting underway at 14:45 (local time, GMT+2) on Friday, before the race on Saturday from 13:00.

Edoardo Liberati, #18 Nissan GT-R NISMO GT3: “South Africa is a new country for me, so it will be my first time at Kyalami. I’m really excited to compete in the iconic nine-hour race and I’m looking forward to this last event of 2019. I hope we can get the result we deserve this time after a few issues prevented us from taking a podium or win in the previous races. Thanks to KCMG for the extremely professional work done this year and to my team-mates for the flawless job.”

Alexandre Imperatori, #18 Nissan GT-R NISMO GT3: “It’s already the last event of the IGTC season. I’m really looking forward to this one, it’s going to be new for pretty much everyone. Everything is pointing towards a fantastic event at this circuit. With KCMG we’re looking to end the season on a high. We’ve shown flashes of speed this year but haven’t yet managed a strong result. The sister Nissan came sixth at Suzuka, so we know we can be competitive and the goal is to get on the podium in South Africa.”

Oliver Jarvis, #18 Nissan GT-R NISMO GT3: “It is great to be back with KCMG for the final race of the IGTC championship. Unfortunately, we have not received the results we had hoped for throughout the season, despite showing some great speed and performances along the way. The goal is to finish the season on a high in Kyalami with at least a podium. Like many drivers it is my first time here in Kyalami, but so far I have been really impressed with the circuit and facilities. Now I can’t wait to get my first laps under my belt.”

Joshua Burdon, #35 Nissan GT-R NISMO GT3: “I’m very excited for the Kyalami 9 Hour this weekend. It’s my first time in South Africa and the people here seem very passionate about motorsport, so it should be fun. The team has been working hard and with João Paulo joining our line-up it should help bring us a good result. We had a top six finish in Suzuka and had great pace, so hopefully we can fight for the podium this time out.”

João Paulo de Oliveira, #35 Nissan GT-R NISMO GT3: “Looking forward to join the team for the Kyalami 9 Hour. It will be my first race in IGTC competing against some of the best GT3 drivers, so I’m really excited. I’ll need to get used to the tyres, which I haven’t run before, and a new track that seems quite challenging. I can’t wait to get started!”

Katsumasa Chiyo, #35 Nissan GT-R NISMO GT3: “I’m really looking forward to the last IGTC race in Kyalami. It’s my first time here and the track looks very good. We have a new team-mate in João Paulo. We’ve known each other for a long time – he’s a very experienced driver, particularly with Nissan. Josh and I head to the last race after finishing sixth in Suzuka, our best result, but our aim is to be higher placed in Kyalami. We have confidence in the car and set-up, so we will do everything we can.”

Paul Ip, KCMG Founder: “The Kyalami 9 Hour represents KCMG’s final race with the Nissan GT-R NISMO GT3 this year. We’ve shown very good pace all year and without various misfortunes we definitely would have been able to challenge the top three in the manufacturers’ championship. The aim is to finish the IGTC season with a strong result on international racing’s return to the historic Kyalami venue. I believe we have the car, drivers and team to finish on a high.”