A perfect weekend by the beach for B-Quik Racing after we emerged from the Bangsaen Grand Prix 2019 with a clean sweep to our name, claiming two remarkable wins from the two event-headlining Super Car GT3 races. 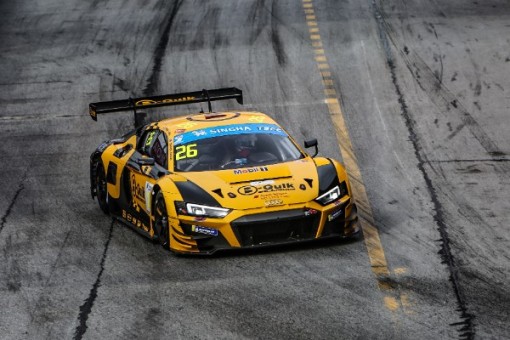 The victories were evenly spread out within the team too as Sandy Stuvik and Martin Rump won Saturday’s Race 1 in the #2 Audi R8 LMS GT3 Evo while come Sunday the sister #26 car driven by Henk Kiks and Daniel Bilski was first past the chequered flag.

This year the Bangsaen Grand Prix moved to a tail end of August date for the first time and rain showers as well as strong gusts of wind proved to be a feature throughout. The weather entered the mix during qualifying after an unpredicted shower hit Bangsaen just as the cars took to the track for Q1 and that made the result a lottery.

In Q2 the team played a tactical blinder to bring Martin in and adjust the tyre pressures during the dying minutes of the session, the No 2 car returning to the track and crossing the start-finish line with just 15 seconds in hand before the chequered flag waved. The Estonian had just one chance to snatch pole and he thumped in a do or die lap getting everything settled through Sector 1 before posting purples in both Sector 2 and 3 to get the job done, grabbing the top spot for Race 2 by two tenths.

In Race 1 Sandy and Martin were in scintillating form at the green lights. Sandy started the 1-hour race and soon picked off the top two runners. After the No 2 car’s extended pitstop due to the Silver-Silver pairing, Martin again passed the top runners to take the lead with room to spare before the chequered flag was unfurled. That was our first win of the weekend done and dusted and a dream Super Car debut in Bangsaen for this pair.

There was less luck though for Henk and Daniel in the No 26 “Evo” as a brush with the barriers saw them retiring and as they were the championship leaders coming into Bangsaen that was costly in terms of points.

However, they didn’t have to wait very long to put that right. It was just 24 hours in fact before they pulled off one of the team’s most epic wins ever.

Sunday’s showdown proved to be a race where they had to work harder for the win than they ever have as the car’s power steering system failed on lap 3. Henk started the race and but very quickly he was struggling to keep the “Evo” on the road and sling it around the corners. The one place in the world where you least want to lose the power steering during a race is around the tight and twisty turns of the Bangsaen Street Circuit.

Henk drove out of his skin as he struggled to keep the car on the track – never mind somehow also managing to keep it the window of where it needed to be to have a shot at a win. He traded some paint with another competitor before handing over to Daniel on target to be in P1 – but his team mate would also have to cope without power steering and the chasing pack snapping at his heels for a whole stint.

The Australian dug deeper than he probably ever has had to do before to keep the No 26 in the lead and he grittily clung onto an advantage of several seconds, although that see sawed as he literally bounced the car off barriers in an effort to get it around the 3.7 km track.

Just as the late Sunday afternoon shadows were gathering Daniel brought the “Evo” over the finishline as the cheers of the crew rang out down the pitlane. Daniel literally fell out of the car onto the asphalt such was the exhaustion he was suffering.

After Race 1 the team had made a huge effort to get the car fixed and ready for Race 2 and really the drivers, crew and engineers had all dug deep to nail the win. As an ecstatic Daniel said afterwards “That’s B-Quik, we just push until you can’t push anymore.”

After Henk and Daniel’s DNF the day before the win came with a maximum point score and that’s allowed them bounce back perfectly in the overall Drivers’ championship hunt and maintain their advantage at the top of the table. It also saw them clinch the Super Car GT3 Am championship with one round and two races still to go.

Race 2 proved something of a mixed bag for the No 2 car. Martin started from pole but ran in P2 and was bottled up behind the leader on a circuit where passing is very difficult until handing over to Sandy early as they tried to find clear air to gain track position.

Now in the cockpit Sandy was up to P5 before making a successful pass for position with a Lamborghini into the pit hairpin but the car tapped him from behind as they reached the exit, spinning the Audi around where it was then collected by another car and clipped the barriers.

Luckily, the damage was minimal and Sandy was able to spin the car around, get back on the pace and make it to the chequered flag in P5 to allow himself and Martin to claim the final step on the podium and help B-Quik Racing bag the Teams’ trophy and as well as their second helping of crucial Teams’ points from the weekend.

All-in-all a terrific weekend for us. Our double points finish on Sunday ensures we retain the lead in the Teams’ championship while in the overall Drivers’ rankings Henk and Daniel remain at the top with Sandy now moving up to third place.